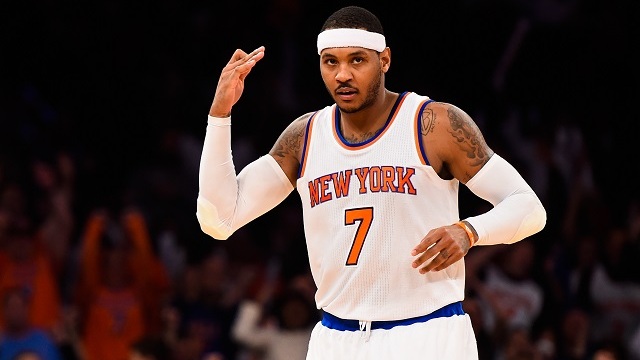 The Knickerbockers continue to stink it up, with a heartbreaking loss to Wizards.  Melo put up an incredible 25 points in the second quarter, but only managed to finish the game with 34.  The Knicks made a valiant comeback effort at the end, but the hustle and determination of John Wall stymied their efforts.  This game was quite depressing because it really hammered the point home that Melo is not who he used to be.  Sure, the flashes of brilliance are there, but a younger Anthony would’ve pushed 50 points without a problem.  On that somber note, let’s get into the rest of the evening!

…But it’s not like Tony Snell doesn’t deserve it!

Long time readers will know that for the past year-and-a-half I’ve been a big Snell fan, and he’s finally flourishing in huge minutes with a 22/2/1/3/0 line hitting 9-11 FG, 4-6 FT, and all with no TO.  The anti-LeBron!  Poor ol’ king James didn’t meet a turnover at the Chicago hotel continental breakfast he didn’t like, going 31/5/4/0/0 with 8 giveaways.  Snell was D-ing up BronBron all game, and ended up with a +29 to LeBron’s -27!  Bron was like, “Ohhhhh what’s that Snell?!”  Tony has been on fire the past 4 games, hitting 28-41 including 15-25 from deep.  And he flashed the full bag of tricks on the Cavs bag of bones slamming a couple early, hitting a floater late, sandwiched with some Kyle Korver-esque 3PT shooting.  I don’t think there’s much we can do about it though in 10 or 12ers with Jimmy Butler probably back after the break, Kirk Hinrich still there to fill some empty minutes, and Mike Dunleavy side-cocking some treys.  But in deeper leagues or dynasties, I think Snell could really turn into something and I have for a long while now.  Here’s what else went down in our final first half game of the NBA season:

Ray Allen, Kevin Garnett, Rajon Rondo and a host of others did not play for the Boston Celtics. The offense was carried by Aleksandar Pavlovic with 16 points, surpassing his previous season high by 6 points. Chris Bosh, Dwyane Wade and LeBron James did not play for Miami, which was led by Dexter Pittman (12 […]

Trailing hot on the heels of yesterday’s Manu news (Manunus!) that he will be watching basketball from incredibly fantastic courtside seats for the next two months while wearing a $5,000 suit like the rest of us insanely wealthy society folk, comes the follow-up jab-cross-jab-hammer combo that Memphis forward Zach Randolph is also out a couple […]

Stephen Curry‘s ankle used up its final sick day of the year, because unlike weak ankles themselves, sick days don’t roll over. (Boom! Nailed it.) Dwyane Wade? His left foot caused an early exit. Then a quarter later, his right foot told his left to stop being such a damn sissy, strap on an extra […]

So O.J. Mayo‘s life of crime isn’t working out as he hoped. First he gets his time with USC struck from the historical record after accepting swag, then his short time as a Bourré cardsharp ended with a black eye, and now he’s suspended 10 games  for using the illegal muscle-builder DHEA. He’s also lost […]

LeBron James felt, for a fleeting moment, like Bruce Springsteen. A stadium full of Midwesterners wearing t-shirts with his face on it, signs requesting that he do stuff; all waiting for the man of the night to put on a show. And he did. The Cavs, in turn, felt for a fleeting moment the energy […]

When I called the first Killers album “crappy,” I was wrong (shoulda saved that opinion for their last two). When I guessed that ‘Lost’ was all in Hurley’s head, I was wrong. When I said that no Ben & Jerry’s flavor could ever top Phish Food, I was wrong (shout out to Americone Dream! Woot!) […]