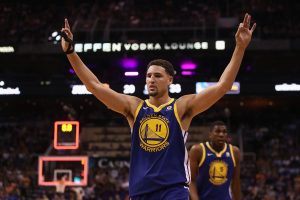 Klay Thompson was not having a good start to the 2018 season. He had failed to reach the 20-point mark in any of the first seven games and was shooting under 40% from the field and 14% from downtown. Klay is a career 45% shooter from the field and 42% from beyond the arc. Regression hit hard and heavy last night, though.

The third time he has eclipsed the 50-point barrier in his career and the third time he has notched a record: 11 three-pointers during a playoff game (2016), 37 points in a quarter (2016), and the 14 threeecolas last night bested his teammate, Steph Curry, who held the previous record of 13 (2016). Klay has some of the most ridiculous heaters I’ve ever seen. Anyways, for fantasy, he’s currently the 76th player according to Basketball Monster. The minutes are down, assists are down, threeecolas are down, and field goal percentage is down. The only concern would be the minutes and assists, but the shooting will come around. He’s just too good, and reminded us all in a big way last night.