(W) BUCKS -VS- LAKERS
With King James and Tha’ Brow out, we hoped this was the Drummond show.
Unfortunately, after all that time off, his big toe wasn’t ready.
Jrue Holiday: Complete baller, Jrue the Damajah is on point.
Rare for the PG to be the “Glue Guy.”
On this roster, he steadies the ship and makes the tough plays.
Efficiency, rebounding and 5 STOCKS, this guy does it all.

Bradley Beal:  Bradley doing Bradley ish.  Helped guide his club to its fifth win of the year against the sputtering Heat.  His laser shot sets up his savvy drive so well this year.  The 5 turnovers hurt a bit, but he’s the only alpha in the nation’s capital.

Now that Thanksgiving is in the rearview mirror, all hands are on deck for Christmas. The neighbors adorn the houses with electric bling, the empty lots are filled with trees standing in Terracotta formation, and we all become tolerant of elevator music. It’s a happy time indeed. Beep. Boop. Bop. You know how you can always be happy? By using the Stocktonator. In fact, one could say that it’s a jubilant time with voices singing Jingle Bells and hands literally jingling bells. Guess who was jubilant and jingled something last night in the NBA?

Jaren Jackson Jr. was unbelievable. The 31 points were a season-high and he jingled the stat box to make sure there was a little something something in each box. He was in foul trouble….again….What else is new? But at least he was able to navigate around it. Now, before you take off your clothes and run around jingling your parts, know that Jonas Valanciunas and Brandon Clarke were both unable to play. Coach Jenkins had no choice but to leave him out there. With that said, this is the ceiling that JJJ can access. He’s young, but it’s only a matter of time before he contributes these kind of lines on a consistent basis. Don’t expect that to happen this season, so expect the inconsistencies, but mental masturbate over what the future entails. 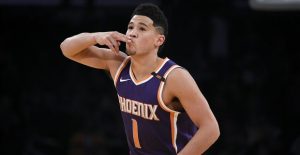 Urbandictionary.com is one of my favorite sites to visit on the internet. When I want the full essense of a word, I go there. It’s like when I travel to another city. If I truly want to get a feel for the new place, I’ve got to go where the streets are not lined with Louis Vuitton stores and people are hovering their selfie sticks in the air. Anyone remember this scene from Boomerang? Ha! Still cracks me up. Anyways, dictionary.com defines booker as: (n) booking agent. Boring. Now, let’s see what the urban site has to say. Booker: 1) In pro wrestling, basically he’s the one running the show. 2) All around awesome person with unhuman skills a very badass person. 3) A half of a blunt removed of its inerts and replaced with “trees”, smoked half way, and saved. 4) An offensive term for a US county sheriff. 5) A type of masturbation that involves…No! Why?! 6) A term used for denying previous sexual intercourse with another person. 7) A person that can run faster than the wind. I was familiar with three of those definitions. How about you? If you knew 5, then I don’t know what to say. Good times? So, I titled this piece as “Devin is a Booker.” He’s not a booking agent. He’s not a professional wrestler, but he does run the show. He seems like an all around awesome person. He does exhibit unhuman skills on the basketball court and he is a badass person. He is not a blunt, but he does catch on fire like one. He ain’t no 5-0, but he did score over 50 once. I’ll skip over 5. He’s probably turning down ladies left and right. He does run pretty fast. And, his last name is Booker, so he’s undeniably a Booker. With all that said, he made pops very proud last night as he went:

I’m not writing 300 words for a chump. We knew Booker could score, but he’s pulling down a board a game more than last year and dishing out almost a dime more as well. The defensive stats remain the same, but he’s still only 21 years old. If he can continue to harness the rest of his game, he could be a top 25 player. As it stands, top 40-50 player is a reasonable expectation.

“Winning isn’t everything; it’s the only thing” (H.R.Sanders)

The Razzball Commenter Leagues entered into the second week with a lot of interesting matches. Injuries once again played a dramatic role, but that’s a part of the game. Managing those along with navigating the waiver wire were the keys to staying alive and dominating.

Here is how the action went down in week 2 across our 12 RCL Leagues:

After opening the season with a two-game appetizer, the NBA provided us with an 11-course meal on Wednesday. No low-carb dieting here, as fantasy manna was raining down from the heavens. All you can eat, baby! There were some impressive performances, as Hassan Whiteside went 26 and 22, DeMarcus Cousins went 28 and 10 with seven blocks, while teammate Anthony Davis went 33 and 18. On a side note, the Pelicans still managed to lose by 12. Trade alert already? Of all the performances, there was one that rose above the rest. Giannis Antetokoumpo went 37 and 13 with three dimes and three pilfers. The number one fantasy pick in many leagues, G showed why and looks poised to carry teams to the Promised Land. As Moses led the Israelites out of Egypt, crossed the Red Sea, and climbed Mount Sinai to raise two tablets above his head, so shall G lead fantasy owners across the barren landscape and up the mountain so that they may lift the trophy and bring glory to those that had faith in him. So it was written by Missy Elliot 0:58….to Get Ur Freak On.