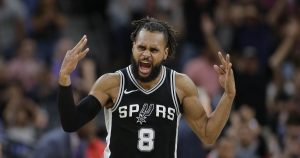 General Mills is an American multinational corporation that produces…..everything! Betty Crocker, Yoplait, Pillsbury, Haagen-Dazs, Cheerios , Trix, Cocoa Puffs, and Lucky Charms are but a few of the brands that contribute baking mixes, cereals, yogurt, and ice cream. Total revenue exceeds $15 billion per year! Patty Mills is the antithesis of General Mills, as he specializes in points and tres. Specific Mills we shall call him. Last night, Specific Mills generated revenue. Not billions of dollars, but revenue nonetheless.

In 29 minutes. Over the past three games, Mills has played 23, 24, and 29 minutes. He’s averaged 18 points on 12.3 shot attempts and 4 tres. The usage rate has been 23.5 and he’s converting 51% of his shots from the field. Scoring is not the issue for Mills, as when he plays for the Australian National Team, he morphs into the Aussie Steph Curry. No, the issues are the inconsistent playing time and usage. He can easily play 18 minutes and shoot seven times or shoot 15 times in 28 minutes. If you need tres, Specific Mills can be a viable option, but know that the playing time is tough to predict. Beep. Boop. Bop. You know what predicts everything well? The Stocktonator.

In 26 minutes off the bench. Dejounte Murray only played 22 minutes, so….Naw, we just don’t know what Pop is going to do, which is a shame because a Murray/White backcourt would be intriguing as F. Anyways, when White does get run, he can provide some boards, dimes, and steals. He just doesn’t get enough to be able to trust, averaging 22-23 minutes per game on the season.

LMA with….Yes, he provided the O but it’s the across-the-board production which puts a smile on our faces. The only thing he doesn’t do much of is dish out dimes (2.4 on the season).

DeRozan has messed around once in his career, back on January 3, 2019 against Toronto!!! Narrative Street! Over the past two games, DD has aaaaaaaaaaaaaaaaalllllllmost messed around in back-to-back games. In the prior game, he scored 25 points, grabbed 9 boards, and dished out 9 dimes. Now, expect some regression to hit at some point, as he’s not going to shoot close to 60% from the field and dish out over 8 dimes per game. His season average is 5.2. He’s been a top 10 player over the past month. He should come back down to the top 40 range.

So. Damn. Good. Bam is a top 40 player for fantasy. The only bugaboos are the lack of tres and below average free throw shooting. He has a good stroke, and has spurts when he shoots close to 80% from the line, so there’s optimism that improves. Not sure about the tres, though. As I referenced in a prior blurb, there have only been 10 instances in which a player has produced a 20 point, 10 rebound, 5 assist, 1 steal, and 1 block season. Bam should join that list soon

Continues to start, play a ton of minutes, and produce. I thought he would disappear, but he’s only gotten stronger as the season has trudged along. Over the past three games, Nunn has averaged 32.8 minutes, 24.3 points, 3.3 tres, 2.7 boards, 3.3 dime,s and 1.7 steals. The usage rate has been 25.8 and he’s been converting 61% of his 16.3 shot attempts. That’s been good for top 20 production. Damn. Now, he’s obviously not going to shoot 60% from the field, but on the season, he’s at 46%. As long as he starts and keeps getting minutes, Nunn is going to be a viable fantasy asset.

Messed around!!! For the first time in his career!!! He’s been close many times this season, but he finally popped his cherry. The points and boards should be asssumed by now, as he is third in the NBA for dub-dubs, only three behind Giannis. As for the dimes, he’s averaging 4.3 on the season. There are just no tres and limited defensive stats.

In 21 minutes off the bench. McBuckets led the Pacers in scoring, as Sabonis, T. J. Warren, and Malcolm Brogdon all scored 22 points each! The Numerology Institute has sent its best people to the scene. If you need tres, then do the Dougie, but know that the floor is low because he only gets around 20 minutes per game.

Jokic did his best Sabonis impression while Sabonis returned the favor and did his best Jokic impression. What a night! It’s crazy how good Jokic is. Points, tres, boards, dimes, 51% shooting from the field, and 80% from the line. The defensive stats aren’t great, but he still contributes a little something something in those areas. I want his skills and IQ in Bam’s shell.

Got another start for Jamal Murray and played 29 minutes. Abort! Abort!

I won’t be able to do a recap for Monday’s huge slate, as I’m out of town, so I apologize in advance. Celebrate the good Doctor’s day and I’ll see you guys on Wednesday. Peace!

MLK day is upon us. & In my opinion, the best NBA day of the year.

Monte is outta here. MPJ got snatched up before me.

For either Stream, River, Stash or Long term.

Also – I’m tempted to pick up Wendell Carter to stash…

Expecting Oubre back tonight, Jrue not too far away, Holmes as well.

I wouldn’t for your squad

Son, you are my guy.

I think I must add Wendell though.

The squad is slowly getting its shit together & I think I can stand the rain for a few weeks. His last update say’s he is closer to the 4 week timetable. Which in my books, gives him another 2-3.

Dumped Monte for Hayes, & unless you talk me out of it, I’m nabbing WCJ for Hayes in the morning & I’m going to sit on him, like WOOD!

Word. I’m always a proponent of going with your gut.

Annnnd Wendell got scooped before I Could get to him.

Lol. You snooze you lose!!!

If you are getting AD, then it’s a no brainer

Got u. Anyways, why not wcj?

Jrue, Bryant and VanVleet all in my lineup on the same day. Been months! Yahoo.

But Jrue, Bryant, Bertans, Conley, (and Oubre) for me. Yahooooo!

Been a while. Just waiting on Holmes now.

Wow, I think you had it worse than me. Just gotta weather the storm. If we could figure out how to replace ankles, we would be rich!

Just wondering what you make of these two things. Both apply for 10 team 8 cat roto:
1) who’s the better stash out of Clarke and Nance? Both have very tidy, fantasy friendly styles of play, but LNJ might actually get a chance if some trades go down, while Clarke seems destined for Minute Limbo if not for the unfortunate event of an injury. Also, I like (and could really do with) Nance’s assist upside.

2) Anyone of Fultz/Sato/Conley/Smart/Huerter/Sato droppable for Culver/Wright (in case he somehow finds himself with some solid minutes somewhere down the line)? I wouldn’t mind rostering either one, but Culver’s percentages might prove an issue and I think I have no drops, so only making space via a 2 for 1 might work.

It’s Clarke for me. His all around game is too enticing. I think at some point he gets a minutes bump.

I’d rather have all the guys listed over Culver and Wright. Maybe that second Sato guy can go though

Damn, I wasn’t supposed to reveal my fantasy cloning prowess! But thanks man, let’s hope those Memphis minutes open up

Lol. I hope so too. I’ll bet on talent

Drop 3 in a points league

Am gonna lose Sabonis next year in a keeper league. Should I trade him for a 1st (top 5 pick) and josh hart.

Where do you stand right now? Have a chance to win it all?

I do. My squad is below

Man, that is tough. I’m keeping Sabonis. The squad looks good and if I have a chance to win it all, I’m going for it. Plus, as much as draft picks are sexy, they are wrought with uncertainity. We play to win the game!!!!

I got offered Holmes for my Norman Powell and i counter-offered with Norman Powell and Horford for Holmes and Barton.
I am standing in the 3rd place of the league and got my IR-slot empty at the moment (for Holmes).
Do you like any of those trades and if so, which one would you go for?

Thanks in advance and keep up the good work!

Whats up, trying to make 2 for 1 trade to open up space for streaming. Currently looking to move harell and rubio/ brogdon for something, punt tres, ft, soft punt points. What player would be appropriate target? Also have two options right now:
1) my rubio/brogdon + harell for sabonis
2) keep rubio/brogdon and flip harell for bagley.

What u think on all of this stuff?

if the owner insists adding Rubio instead of Brogdon, is that too much?

Naw, brogdon and Rubio are very close. I just chose brogdon to break up the pacers stack

Hey Son,
Love that Patty gets a headline!
Who would you rather have in your IR, Holmes, WCJ or Burk?
Thanks man

Of course you do!!

That last one was typo, meant to say Nurk. Same answer?

Hey yooo! interesting trade offer….I own Huerter….guy is offering me Draymond green for him….would you pull the trigger or do I keep the ginger??

F- Dwight Powell- Lost him yesterday, will either pickup Thad Young or stream until oladipo comes back

Yes, I would make that trade

I’m a Bam guy, but Ayton is a good option as well

Depends what you need.

Painful to watch Jrue tonight. Mostly on the weak side with Ball and Ingram dominating the rock. Thought he might get a spike in assists dropping it down low to Zion but not if he is standing around off ball. He can get to the rim whenever he wants but there is a shift here with Jrue much more of a two guard than a co-point guard. Not good. Yes, he had 7 triples the night before but that is not his game. Sell now.

It’s possible, but when they were all on the court together, Jrue was just fine. I need a bigger sample size to consider it the N. W. O.

Hope you are right. He has a crappy playoff schedule for our league too so I will monitor closely.

If playoff schedule is bad for your league, then I have no issue with making a move