Quick reminders we all need this time of year: It’s early. Still really early. Three of your players are day-to-day or worse, and two more are horribly underperforming. Hang in there. Unless they’re just not getting a usable amount of minutes, give your guys some time to build up that sample size so you have a better idea of who they’ll be this season. Also, with so many players missing games early on, don’t go the other way and overrate guys that are doing well in part because a better player is out of their team’s lineup. With that said, the first few weeks can be a great time to speculate on potential impact free agents and to make great buy-low trades, since we’re all still unsure where a lot of these players will settle in.

Today, I’m going to try to give you a new frame of mind with which to view the same old stats we’ve been memorizing for years. I said I’d work on my analogies, so I’ll take another whack at one.

Everyone else in your league:

You, after reading this week’s Run The Numbers:

Say you’re looking to make a trade. How about Anthony Davis for Demarcus Cousins because you’re nervous about AD’s most recent injury? Here are Basketball Monster’s per-game stat projections for them:

Pretty similar, right? Yes, overall, very similar. Couple 3s, assists, blocks, and turnovers separate them. But what if you care about a specific category? Well, is the difference between 2.2 and 0.7 three-pointers bigger than 1.8 and 3.1 turnovers? Well, that’s 1.5 and 1.3. All numbers aren’t created equal, though, and that comes out to standard deviation value differences of 1.53 and 1.72 when you consider statistical scarcity and more. So, actually AD’s turnover advantage is more valuable than DMC’s lead in 3s. Those values are from something similar to what’s on the ESPN Player Rater and Yahoo’s Std Dev values. Since those values are way too complicated to come up with from eyeballing stat lines alone, I’m just going to show you the first step toward determining them. This will give us a practical way to better know how much a player will help us where we need it.

The exercise is finding a baseline average. You could try to create an average for a replacement level fantasy player, but I thought it would help most if we knew what an average fantasy starter pulls down for their stat line. I also figured it would help to have it broken down by position. How many players are “starters”? Every league is different, but I figured our Yahoo RCLs start 120 players at a time (156 if we’re subbing in all our bench players). Plenty of 10-team leagues start 12 players, too, so 120-ish is probably good amount to use. Now, this is based on the per-game stats of last year’s top 40 players at each of the five positions. This comes out to a total of 123 players, because I counted players at each of the positions for which they’re eligible on Yahoo (if you play on ESPN, remember yahoo is more lenient with position eligibility). There’s a lot of overlap because of duplication, triplication, and Greek-Freaky quadruplication. Also, this doesn’t account for the extra value of a guy that’s eligible at multiple positions. Though, this might help you determine the most valuable spot to play a guy that’s eligible at more than one.

A note about percentages. There are more ways than one to come up with a number here, since each player takes a different number of attempts. I took the average of all 40 players’ percentages, and I also did the total FGM divided by total FGA (and total FTM/total FTA) of the groups of 123 and 40. Then I used the midpoint of those two results.

You may have seen something like this before, and likely for other fantasy sports, as well. It can help you to see if your players are above average starters by category based on their position, which I think is helpful. Also, knowing these averages can show you how much you need to make up in a category. Like if you take Kevin Love as your PF. He averages about 0.4 blocks, and the average for that position is 1.0. That means you’ll need a guy that gets 1.6 to get back to average. But let’s see if we can take advantage of this information some other ways. Back to Boogie and Brow.

These guys are eligible at both PF and C, but since C feels thinner these days, let’s compare them to the center baseline. This will help us to not be swayed by what we assume are good or great numbers just because we’re used to them or they exceed some arbitrary line like 10 rebounds or 2 steals.

Three-Pointers, after subtracting the baseline:

Quite a bit different than comparing the raw stats. This is how far away these guys are from an average starting fantasy center. How about assists?

This is looking like a landslide. But what about turnovers?

“So what’s the point? You just moved the goalposts.” Yes, but this tells us much more when coupled with this fact: As these adjusted stats get farther away from the baseline stats, their values accelerate (5.0 above the average is more than twice as valuable as 2.5 above the average). Mainly this is due to the scarcity of stats.

Another thing to note that seems obvious is that a change of 1.0 in one category isn’t the same as 1.0 in another. This is abundantly clear when you think about points vs blocks, but I think we mess this up when thinking of rebounds vs assists (or 3s vs steals vs blocks vs TOs), since they seem like they come in relatively the same volume. They don’t, but more importantly, they aren’t distributed among the players in the same way. So, for example, an increase in assists is more valuable than the same increase in rebounds. You’d need bell curves and standard deviations and other junk like that to really boil it down to those player rater values, though.

My thought in getting familiar with these concepts and baselines is that another person in your league will see something like 2.8 and 2.0 blocks and think that it’s not a big drop off. Adjust that by the center baseline stats, and that’s 1.6 and 0.8 over the average. And, above, I mentioned that the farther away from the mean, the faster the value accelerates. So, you know that 1.6 is more than twice as valuable as 0.8. And, keeping the idea in mind that all stats are not created equal, that drop in blocks is about the same as going from 29 points to 21. Not so negligible.

So, get to know those baselines, even if it’s just the one that’s the positionless average. Something else interesting to note: these positional averages have changed drastically over the last few decades, and will continue to evolve. Back in my day, point guards didn’t score so much, and centers rarely made three-pointers. 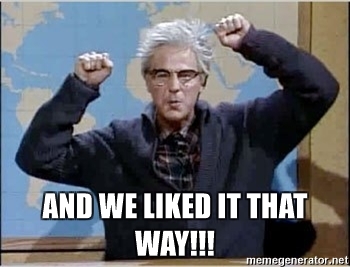 To keep hope alive that one of your borderline-startable players might just go off one night, I give you Tony Delk’s career game (1/2/01). 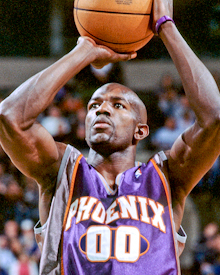