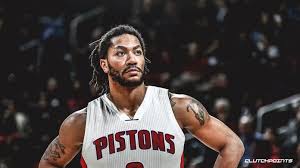 Roses go through many stages of existence. First, there are the seed and germination stages, when life is created. Then, the flowers grow and reproduce. Finally, it’s all about spreading the seeds so that the circle of life can be completed. Derrick Rose knows all about that, as he’s played in Chicago, New York, Cleveland, Minnesota, and now Detroit. At 31 years old and coming off two knee surgeries, Rose obviously isn’t the bright flower he once was, but with proper pruning, he can still blossom with the best of them. Beep. Boop. Bop. You know what allows you to blossom? The Stocktonator.

Played 29 minutes off the bench, a season high. as the Pistons roster was pruned last night because both Blake Griffin and Andre Drummond did not play. Over the past three games, Rose has been a top 65 player for fantasy, providing points, tres, dimes and steals. The usage rate has been 33 while the percentages have been good from both the field and line. When everyone is healthy, expect top 100-ish production, as he will likely receive around 24 minutes of run per game.

Got the start and played 33 minutes, as Blake Griffin did not play. Morris is mainly a points, tres, and boards guy.

In 28 minutes off the bench. I like Wood, and he makes me erect when I think of the across-the-board production he can provide. Last season, when given significant run at the end of the season, Christian answered our fantasy prayers by delivering multiple week-winning scores. 23 points, 9 boards, 1 dime, 6 blocks, and 3 steals on March 26th. 25 points, 9 boards, 1 dime, 1 block, and 3 steals on March 28th. 26 points and 12 boards on April 9th. Before you start putting a condom or lotion on Wood, there’s risk. The coaching staff may not give him significant run if Blake is out and, keep in mind that Drummond was out too last night, but the upside is tantalizing and worth it if you can get him for free.

Continues to start and played 27 minutes. Over the past three games, Brown has delivered top 15 production! 14.3 points, 0.7 tres, 6 boards, 4.3 dimes, 2.3 steals, 1 block, 52% field goal percentage, and 83% shooting from the line on 6 attempts (shooting 65% on the season). That’s obviously not going to continue, but Brown can provide boards, dimes, and defensive stats.

Rui Hachimura only played 17 minutes due to a groin injury. Sayonara, Rui.

The Beal was perfectly cooked last night. Top 30 player on the season, as he provides a shit ton of points, tres, boards, dimes, and steals. The only he doesn’t provide are boards and sometimes the shooting efficiency abandons him. He needs to put a leash on that sucker.

In 22 minutes off the bench. The Make-A-Ish-Smith Foundation was ecstatic over the production. Unfortunately, they are going to have to wish harder, as the IT guy looks to be in the driver’s seat.

Love hurts. Only played 25 minutes because the Cavs got abused, 113-133 by Toronto. I was about to write that someone should call the domestic hotline, but this was an international incident. US embassy?

Someone get Sexton some Kamasutra books because his game is so one-dimensional. Needs to expand his repertoire.

Played a team-high 38 minutes. I’ve heard that Garland is untouchable in trade talks, so does that mean Sexton isn’t? Garland and Sexton seem redundant, so my guess is that Sexton could be moved. That’s if anyone is willing to trade for him. He is still only 20 years old and can get buckets.

Played 37 minutes, which is his season average. He is only one of two players to average more than 37 minutes a game. The other is James Harden. Can he hold up? Place your bets.

Played 33 minutes and led the Mavs to an impressive 120-116 victory over the Bucks in Milwaukee! Trade Luka Doncic!!! I kid. This is what the Unicorn can do. He’s stated this season that it’s been a struggle to adjust to his new team and role. This is why we should really admire and appreciate what LeBron and AD are doing.

Got the start for Doncic and played 32 minutes. Brunson is an excellent source of dimes while Luka is out, but that will only likely be for two weeks. Now, if Jalen calls up uncle Charles to “do what he do,” then that time frame could be expanded.

In 19 minutes off the bench. In the real world, Wright is wrong for being a criminal. For fantasy, though, getting one’s 211 on is an admirable quality.

Over the past 16 games, G is a top 25 player, despite averaging under 30 minutes per game!!! The usage rate has been 41.5 over that span. Over the past three games, G has garnered a 47.7 usage rate!!!! Straight gangster.

Continues to start and played 30 minutes for Eric Bledsoe, who will be out a few weeks. The usage rate is low for DD, so don’t expect many points, but the contributions in the other cats have been bountiful. Useful for as long as Bledsoe is out.

In 25 minutes off the bench, a season high. If you need tres, Korver could be an option, as he could see elevated minutes due to the Bledsoe injury.

The #12 player for fantasy over the past four games. It’s all about the shooting efficiency for LaVine, as that number has been 52%. Normally, he’s in the 44-45% range.

Gallinari has been brutal as of late (shooting sub-30% over the past three games), but at least he was able to provide some counting stats. Maybe he’s just letting fantasy nerds down easy before he succumbs to injury.

Like a good neighbor, Chris Paul was there!!! Aaaaaaaaaaaaaalllllllllllllmmmmmmmmmmoost messed around. There’s been chatter that CP3 doesn’t get traded. Is that why he’s been the #5 player over the past 14 games?

In 30 minutes off the bench. Dennis was not a menace for your fantasy teams. Only for the Bulls. Top 60 player over the past seven games. Dennis provides points, tres, boards, and dimes. Don’t count on the defensive stats, but once in a while, he will entertain us with a few.

LMA!!! No laughing matter last night. I was getting worried about the boards situation with him, but maybe I was just being a worry wart.

Got the start and played 29 minutes. Over the past three games, Murray has played 29, 31, 17, and 32 minutes. Pop said the minutes restriction is gone, so the DMs are going to get flooded. With that said, it’s Pop, so you never know what he’s going to do. Murray won’t provide tres, but he’s an excellent rebounder and will contribute dimes, steals, and blocks.

In 21 minutes off the bench! The stat line has already been sent to the World Numerology Center. Gay can provide across-the-board production, but doesn’t get enough minutes to feel all warm and fuzzy.

Top 25 player for fantasy. The only bugaboos to Capela’s game are the lack of tres and poor free throw shooting.

94% from the line over the past three games. If we zoom out, 82% over the past 13 games. Hmmph. The last two seasons, he shot 65% and 73% from the line respectively. That’s obviously huge for Russ if he’s figured that out. Regardless, he will likely finish as a top 40-50 player, as the turnovers will still be high and the field goal percentage will be low…even if he shoots well from the line.

Played 29 minutes off the bench. He’s playing a shit ton of minutes and jacking up tres. When Eric Gordon returns, McLemore will disappear like the McRib.

Top 10 player on the season. This Butler has been getting busy all year. The most surprising development, though, has been the increase in dimes (from 4 to 6.8). I guess it makes sense that a Butler would help others and get paid to do it. And they say good help is hard to find.

Played 31 minutes off the bench. Top 40 player over the past four games. Airplane Mode has been getting his defense on and providing tres, something he worked hard on this offseason. Now, he may be getting elevated run because Justise Winslow has been out, but I wouldn’t be surprised if he carves out a substantial niche for himself. Someone to monitor, especially if you desire defensive stats.

Played 38 minutes off the bench.

Duncan Robinson was in foul trouble and Dragic and Winslow were both out, so elevated playing time.

In 25 minutes. A varsity performance for JV, which hasn’t been the norm of late. Too much hanky panky under the bleachers perhaps? When he’s on, JV is a dub-dub and block machine.

In 35 minutes. Melo has been a top 25 player over the past three games!!! LOL! He’s been contributing a ton on defense. And he’s shooting a 46% from the field. What parallel universe have I been transported to? Those aren’t going to last, but that’s not to say Melo can’t be a viable fantasy asset. He’s going to score, board, and provide tres. Top 125 is a realistic expectation.

Not the Mt. Whiteside eruption I was expecting, but still a good game. Tied for fifth in dub-dubs and fourth in blocks per game.

Continues to start and played 31 minutes. He’s going to tank your field goal percentage, but if you need a 3-and-D player, Bazemore can be of assistance.

McCollum will pop off like this from time to time. He actually has 50-burger upside. With that said, he’s usually a slow-and-steady-wins-the-race kind of guy. Top 50-60 player for fantasy, as he will provide a little something something everywhere, but won’t dominate anywhere.

I like Oubre a lot, as he contributes across the board. If he averages 0.2 more blocks, then he too shall join the illustrious 1/1/1 club. Now, the usage was up a little last night because Devin Booker did not play, but he’s averaging 17.6 points per game on the season, so he’s no slouch in the points department on the reg.

Got the start for Booker and played 31 minutes. Mikal is a boards and steals guy who has the potential to tank your percentages. Prior to last night, Bridges was seeing elevated run even with Booker in the lineup, so he’s viable if you need what he provides.

The numerology nerds are going to have a field day with stat line as well. The shooting sucks but whatever. He messed around and is second in the league in dimes!!!