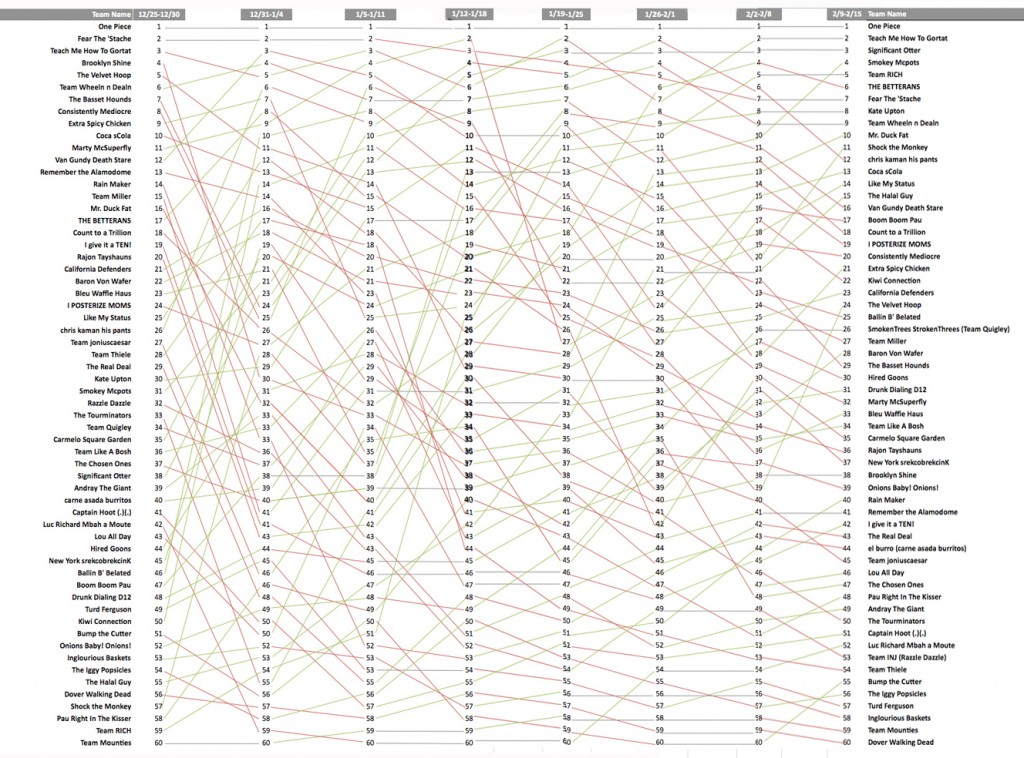 Week 8 bangs and shimmies its way to a close with seven of last week’s 10 top teams staying right where we left them. Week 7 saw the bottom feeders remaining sedentary. This week it’s the top feeders. Also, I’m pretty sure “top feeders” is not a term for anything. I think it’s just something I made up to entertain myself because Lord knows, “The Office” is no longer entertaining me. And while we’re speaking about entertaining things, I like looking at a team’s rankings from one stat category to the next and get an overall feel for what kind of team they are fielding. Usually if a team ranks high on, say, 3ptm, FT% and STL, that team is probably not going to fare as well in the RBD, BLK, FG% category. Simple, right? Looking at a few of the RCL’s teams, the occasional squad sticks out as being quirky, clearly led by a couple players with unique skillsets that buck the system, go against the grain, and are constantly damning the Man.

Boom Boom Pau ranks in the top 4 in both RBD and STL, which are not usually two categories that pair together well. His solid rankings in those two categories are brought out even more by the fact that he ranks outside the top 21 in everything else.

chris kaman his pants ranks in the league’s top 10 in both PTS and RBD, so one would assume he’s got a platoon of elite big men. He ranks 52nd  in FG%, usually a gimme among PF/C-led teams.

Smokey McPots ranks in the top 14 in both FT% and 3PTM, suggesting his team is the opposite of ckhp. Smokey’s team is likely filled with trigger-happy guards and yet he ranks in the bottom 13 in AST, a common stat often tied to little guys with solid shots.

Coca sCola might be my favorite outlier. His team also ranks in the top 9 in both FT% and 3PTM and in the bottom 9 in RBD. None of this is surprising until you realize he’s also top 12 in blocks. What kind of team shoots accurately, blocks a ton, but can’t grab a rebound if it fell on the floor in front of him?

Take a look at your own team. Some of you have very obvious weakness/strength correlations, some of you don’t. Considering these things might help you form some trade ideas or strategies going forward. Or not. Here’s the spreadsheet.