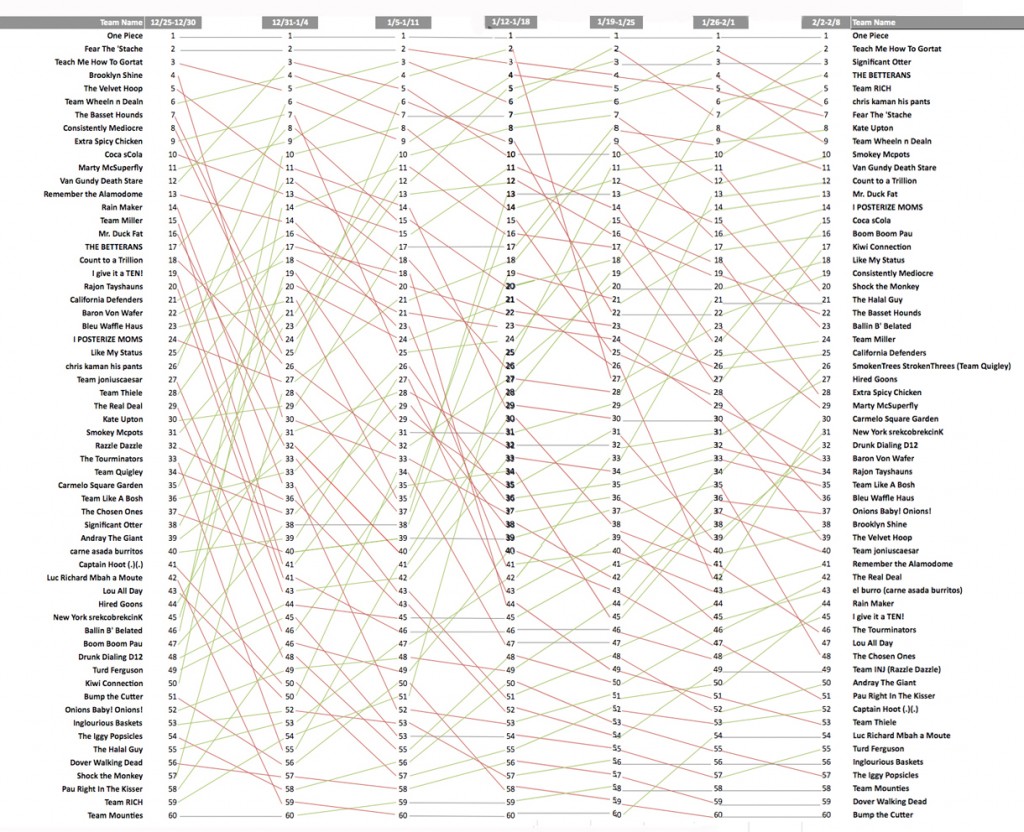 Week 7 finds a few grazing gazelles dying from hunger near the bottom of the league. What? That odd and perhaps inaccurate metaphor doesn’t make sense to you? Mon Dieu! Basically, we’re starting to see the bottom of the league level out a bit as they slip farther and farther out of contention. In another couple of weeks, the gray lines signifying no movement will appear more like flatlines on a heart meter. Now that I’ve used a weak metaphor and weak simile in the same paragraph, let’s look at who’s doing what and when and to whom in this week’s RCL recap.

I noticed an intriguing pattern among the category leaders: seven different teams lead the league in at least one stat category. Of those seven teams, five fall somewhere in the bottom 10 in at least one other category, suggesting that in order to succeed in one, they forfeited the other.

SmokenTrees StrokenThrees leads in FG%, but has the sixth worst SPG average in the league.
Hired Goons leads all-comers in both FT% and SPG, but ranks third worst in BLK and fifth worst in 3PTM.
Our PTS leader, Teach Me How To Gortat, has the no. 50-ranked 3PTM in the league.
Significant Otter is the league’s best rebounder but shoots the eighth fewest threes.
Bleu Waffle House leads in assists but ranks 51st and 54th in FG% and FT% respectively.

Only Shock the Monkey (BPG) and The Basset Hounds (3PTM) lead the league and managed to stay out of the bottom 10 elsewhere.

What’s even more interesting (and lends itself a little to my theory that it’s better to be balanced everywhere than stacked in a few places) is that our league’s overall leader One Piece doesn’t the lead the league in a single category, but he’s top 8 in six different categories and no worse than 33rd in his weakest category.

Anyway, find your own damn patterns if you’re into it. The spreadsheet is here … wait. No. I moved it. It used to be there, then I moved it here. And now it’s here. I think?