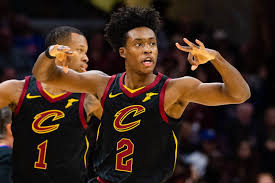 For much of the season, Collin Sexton was a one-dimensional, wham-bam-thank-you-ma’am player. He’d huck. He’d chuck. He’d blow you away with how little the contributions would be in the periphery stats. There have been only three games this season in which he’s scored single digits. He’s failed to jack up double digits shots in just one game. What makes it more impressive is that he dished out more than four dimes in only four games and hasn’t been punched in the face by his teammates. Yet, here we are in game number 45. Are we witnessing a new, improved, and more mature Sexton show?

Jordan Clarkson was traded from the Cavs 15 games ago. When he left, Sexton saw an increase of over two minutes of run per game and close to two more shot attempts. Over the past three games, though, Sexton has averaged 23.7 points, 2.7 tres, 5.3 boards, and 4 dimes! The usage rate has been 30.8 and he’s jacking up 20.7 shots per game. The boards and dimes are the most eye-opening stats, as the season numbers are 3.3 boards and 2.4 dimes. Small sample size I know. Not something you want at a Sexton show. Anyways, Sexton is only 21 years old and has played 126 career games. There’s a chance things have clicked. Now, from a fantasy perspective, Sexton is still outside the top 100, even with the increase in boards and dimes, because of the lack of defensive stats. Hey, can’t go from a zero to a hero overnight. Beep. Boop. Bop. You know what’s heroic every day? The Stocktonator.

In 28 minutes off the bench. Over the past four games, he’s received 24, 25, 28, and 28 minutes. The three prior games, he played 19, 19, and 20 minutes. Shrug. Maybe the Cavs are preparing for some trade deadline activity? If Kevin Love or Tristan Thompson get traded, that should be a boon for Nance. He can score, even provide some tres, grab boards, dish out a few dimes, and get his 211 on. Curiously, for how athletic he is, the blocks aren’t voluminous. The biggest bugaboo is the poor free throw shooting, but he doesn’t shoot a high volume so the impact in negated.

Mmmmmm, the Beal was cooked expertly last night. Over the past four games, the usage rate has been 34.5 and he’s converted 57% of his 19.8 shot attempts. Hmmmm, no way the Beal can keep cooking like this. He’s shooting 45% from the field on the season.

Gary Payton II received the start but only played six minutes. He contributed three boards. Isaac Bonga started ahead of him after halftime. When Bonga leaps over you on the depth chart, it’s time to say sayonara.

In 27 minutes off the bench. It’s been seven games since Bertans returned from injury. He’s not fully back to his en fuego ways, but it feels like the good times will be returning soon.

In 26 minutes off the bench. The Cavs are the fantasy elixir, making the most average of players into stars. The Cavs are PEDs. They should be banned!!!! Smith will get around 26 minutes of run per game and provide some points, tres, boards, and dimes. The field goal percentage is good, but the free throw shooting is poor. The Wizards play at the fifth-fastest pace, so there are opportunities, but Smith needs Isaiah Thomas to disappear or Bradley Beal to sit in order to access any kind of ceiling.

Yawn, just LeBron messing around…..AGAIN! For the 114th time in his career. Anyways, LeBron is averaging 10.8 dimes this season, good for numero uno in the league. In his 16-year career, he had been over 9 dimes once. Crazy.

Played 27 minutes. He was returning from the booty injury so no need to push him, as the Lakers easily dispatched of the Nets, 128-113. With James Harden’s recent struggles, AD is now the #1 player for fantasy on the season. That’s on a per-game basis.

Got the start and played 23 minutes because JaVale McGee did not play due to the flu. Still didn’t get a full load despite McGee being out. Put that in the file cabinet if the situation arises again. Dwight is averaging 20 minutes per game on the regular and providing boards, blocks, excellent field goal percentage, and shitty free throw percentage.

In 23 minutes off the bench. Rondo is like a box of chocolates. You never know what you’re going to get. But…..You know when you open a box of See’s candy? And there are all different shapes and sizes of chocolates? You sort of kind of know which ones are safer than others. Like the thin wafer things are safe because you know there is no filling inside. Rondo provides dimes. He has the ability to provide more, but nothing to be counted on a nightly basis.

Prince is like a box of….Kidding. We know exactly what we’re getting from Prince; shitty field goal percentage, tres, boards, and steals. On the season, Prince is shooting 38% from the field. Yuck. With that said, he’s playing 28-30 minutes per game. Top 150 player on the season.

Got the start and played 30 minutes. DeAndre Jordan did not play due to a finger injury, so it was a disappointing performce from Allen. Granted, the matchup against the Lakers was a difficult one, but still. No wonder the Atkinson Diet doesn’t include a full serving of Jarrett.

Dinwiddie is shooting 31% from the field over the past three games. Yuck. He’s shooting 41% from the field on the season, so expect that number to improve. Now, the big news is that, since Kyrie Irving returned to the lineup, the usage rate for Dinwiddie has plummetted from 30 down to 22. Correspondingly, the shot attempts have gone down from over 18 to 12. The rebounds and dimes have increased, though, and he’s still playing over 30 minutes per game. Top 150 player for fantasy.

For the Mavericks, Luka Doncic is the foundation. Kristaps Porzingis is the pillars. DFS is the nails that keep everything together. He’s a low usage player who won’t provide many points, but will hit the open tres, grab boards, and provide a little something something in the defensive categories.

Played 25 minutes. Second game back after returning from injury. It’s going to take time for Porzingis to get fully ramped back up, as the Mavericks will likely be extra careful with him.

Got the start and played 26 minutes as the Mavericks are going small with Porzingis at center. Whether that continues remains a question, but he’s an interesting source of points and tres at the moment.

The poor shooting efficiency has reared it’s ugly head again for Doncic. I still think he’s getting back into the groove from his injury, but it’s something to monitor, as that was the main reason why I had him ranked so low in the offseason. Over the past seven games, he’s been shooting 42% from the field and 64% from the line.

In 23 minutes off the bench. The Mavs went small, so the increased playing time didn’t come to fruition with the Powell injury. It could be a matchup thing or the N. W. O. Something to track. Regardless, Kleber is still a useful fantasy asset who will provide points, tres, boards, blocks, and good percentages.

Just when you think you’re done, Melo sucks you right back in. He has been providing some D this season, but not something to rely on every night. Points, tres, and boards are what he provides.

Got the start and played 36 minutes. LOL! The points are a mirage, as he’s a low usage player. Granted, he just got traded to the Blazers, but I don’t see him having a usage rate over 12. With that said, if he gets the minutes, Ariza could provide some tres, boards, and steals.

C. J. McCollum did not play. Y’all know what time it is then….