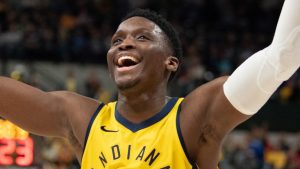 Oladipo, Ho! That jam would always get me so pumped up, and it’s perfect for the return of Victor Oladipo to the NBA. Two years ago, after being traded to Indiana for Paul George, there were questions about Oladipo’s place in the league. Was he a bust? For fantasy, many said yes because he finished as the #87 player in 2016. Well…..Oladipo, Ho! He came out with a vengeance the following year, garnered a 30.2 usage rate and finished as the #10 player! 23.1 points, 2.1 tres, 5.2 boards, 4.3 dimes, 2.4 steals, and 0.8 blocks with 47% shooting from the field and 79% from the line! Oladipo, Ho! Unfortunately, the following season, he ruptured a tendon in his quad after 36 games and was done for the season. After year of grueling rehab, Oladipo made his season debut last night.

In 21 minutes off the bench. The shooting efficiency was off, which was to be expected, but he did send the game to OT with a game-tying tres. Once a baller, always a baller. Beep. Boop. Bop. You know what’s always balling and shot calling? The Stocktonator. Anyways, the Pacers have said that there will be a 24-minutes cap through the All-Star break for Oladipo. It’s just nice to have him back on the court. If he can remain healthy, there’s a chance he gets ramped up to 30 minutes per game and help teams in the fantasy playoffs. Oladipo, Ho!

In 28 minutes off the bench, a season high. The game went to OT, so HutchiSON got some extra run. An interesting development, though, was that he played over Kris Dunn in OT. Could be something, could be nothing. I lean towards the nothing camp but something to keep an eye on. Prior to last night, HutchiSON had averaged fewer than 19 minutes per game.

Top 20 player over the past seven games. Regulators!!! Mount up. Warren has been a straight G, averaging 21.6 points, 1.1 tres, 3.3 boards, 1.6 dimes, 1.7 steals, and 0.6 blocks with 57% from the field and 88% from the line. Now, Warren has played in 47 of 48 games this season. The most he’s ever played in five prior seasons was 66 games. We are at the fork of the road, folks. Either history is going to repeat again or Warren has shed his injury-prone label like a crab molting.

In 15 minutes off the bench, as Myles Turner did not play due to illness.

Got the start but only played eight minutes due to poor play. Dwane Casey said Doumbouya could be sent down to the G League so…..1 + 1 = ?

Over the past three games, Dre has been a top 150 player! The sky is falling! The sky is falling! The counting stats have all been there (points, boards, dimes, steals, and blocks), but the percentages. Oh, those percentages. He’s been shooting 41% from the field and 43% from the line! So bad that it’s funny. As long as he’s engaged and healthy, Dre should finish as a top 20 player.

Continues to start and played 31 minutes. In eight games as a starter this season, Rose has averaged 30 minutes, 21.1 points, 0.6 tres, 3.8 boards, 6.5 dimes and 1 steal with 51% shooting from the field and 84% from the line. That’s been good for top 60 production. There are rumors that Rose could get traded. That may not be a bad thing, but depends on where he ends up. The minutes would come down, but he was posting top 25 production in 26 minutes off the bench for Detroit.

In only 21 minutes off the bench. Play the man!!! The Sabbath cannot stop this Christian. Only Dwane Casey can.

In 26 minutes off the bench. Since returning, Reggie is only playing 23.4 minutes per game, but the usage rate has been a robust 31.5. Reggie is a scorer and can provide points, tres, and dimes. He’s shoting 47% from the field right now. That’s not going to continue. He’s more like a 42-43% shooter from the field.

When Taurean shoots well, he is a king. Unfortunately, he usually doesn’t, hence he’s a Prince. Over the past four games, he’s been shooting 45% from the field. Talk about a heater. On the season, he’s at 38%.

In 29 minutes off the bench. That’s probably the ideal role for him, as Kyrie sucks up so much usage on the starting unit. On the season, Dinwiddie garners a 30 usage rate coming off the bench. Points, tres, boards, and dimes are what he provide. No defensive stats.

13th in the league with 22 dub-dubs. Boards, blocks, and good percentages are what JV provide, all at a varsity level. Top 60 on the year.

Is Ja exciting? Hell Ja. Do I love him? Ja. Is he in the ROY conversation? Ja. For fantasy, he’s a top 100-ish player, though. He provides points, boards, dimes, and steals, but no tres or blocks and the free throw shooting vacillates. The field goal percentage of 48% is great for a guard.

I’ve been sauntering down to the Brooks recently; butterflies, birds chirping, sunshine, and plenty of points. He’s scored at least 20 points in four straight games and been a top 55 player for fantasy. Outside of points, tres, and steals, Brooks doesn’t contribute much else, so when the 52% shooting from the field regresses back to the normal 42% range, then he goes back to being a top 100 player.

The usage rate is 29%, so that’s not the problem. He’s scoring close to 20 points per game. Nope, that’s not it. He’s grabbing over 9 boards a game. Moving on. He even dishes out dimes, yet Randle is not even a top 150 player for fantasy. No defensive stats, limited tres, and not-so-great percentages. Those things matter….to overall value. Fantasy is a context-driven game, so don’t dismiss Randle, but make sure he fits your roster construction.

The Knicks definitely have a type; players who can mess around but do little else and who have issues shooting the ball into the hoop. Randle and Payton were made for each other and fit perfectly on the Knicks. I am absolutely flabbergasted that the Knicks are 13-36 on the season. Hey, Atlanta. You’re 12-36 and have players that can actually put the ball into the basket. Stupid defense. Anyways, Elf did get ejected from the game last night for shoving Jae Crowder, so there is a chance he could miss some time.

In 31 minutes off the bench. Still crazy to me that Taj Gibson is still starting. Open Mr. Robinson’s neighborhood!!! At least he played 31 minutes last night, only the fifth time receiving at least 30 minutes of run in a game. Over the past eight games, he’s been a top 40 player despite averaging 25.2 minutes. Hopefully, last night the start of something good for the neighborhood.

Hack-a-Rudy! Say sayonara to your free throw percentage this week Rudy owners. Only the ninth game that Rudy has not swatted a shot in a game. Impressive.

Top 25 player over the past 14 games. The usage rate is over 30, yet the turnovers are only at 2.5 per game. Very impressive. The only thing that Mitchell doesn’t contribute are blocks.

Everything is right with the world when Double Ds are eye-popping. The 38 points were a season-high and came on the heels of a 36-point, 10 board, and 3 dimes performance the prior game. DD has had heaters this season when he’s been a top 10 player, but you know where he’s ending; as a top 40 player.

Got another start and played 22 minutes because LaMarcus Aldridge missed another game due to a thumb injury. Last game, Poeltl provided 16 points, 13 boards, 1 dime, and 3 blocks. This is why Poeltl was not starting to begin with. Fine, that’s not fair. He feasted on Chicago, a team that sucks, but struggled against Rudy Gobert and the Jazz. No shame in that.

Played 30 minutes!!! Only the fourth time this season receiving at least 30 minutes of run in a game. The minutes are all over the place, so he’s hard to trust, but if Pop ever unleashes him, watch out. Points, boards, dimes, and defensive stats would be voluminous.

In 25 minutes off the bench. Mills stuck his out of the ground once again to unleash Aussie Steph Curry.

Got another start and played 27 minutes. Dort has started the last five games because Terrance Ferguson has been out due to personal reasons. Over that span, Dort has contributed 6.8 points, 1 tres, 1 board, 1.4 dimes, and 1 steal. The answer is more than likely no.

In 21 minutes off the bench. Over the last six games, he’s been a top 30 player despite averaging only 22.4 minutes. Boards, blocks, steals, and amazing, stupendous, and splendiferous field goal percentage of 77%!

Made his third straight start and played 27 minutes. Looks like the N. W. O. Bogdan can score and provide tres and dimes. He also gets his 211 on. Let’s see what he’s made of.

Only played 23 minutes off the bench. As Scooby would say, “Ruh-roh”. The Kings got blown out 100-120, but still. Hield had been balling the F out in the new microwave role and should be fine going forward.

Only played 17 minutes. Capela has been dealing with a heel issue, but not sure if that was the reason for the limited run. The Rockets went small so maybe it was a tactical decision, but I’m thinking he’s not 100%.

Played 42 minutes! With teams doubling James Harden, Westbrook has been taking advantage. With that said, that’s not the only reason for his success. He’s not jacking up tres, looks spry, and attacking the basket with Russ/Hulk aggression. Over the past six games, he’s been the #3 player. The usage rate has been a whopping 36.5 and he’s attempting 26.2 shots per game! 35.2 points, only 0.2 tres, 9.8 boards, 8.3 dimes, and 2.3 steals with 56% shooting from the field and 82% from the line will do that. 5.3 turnovers, though. Turnovers schmurnovers. With all the shooters that the Rockets have on the floor, it’s tough to stop Russ from attacking the basket. It will be interesting to see if teams continue to take Harden out of the game and let Russ flourish, or will they adjust.

Now, teams are doubling Harden. No doubt, but Harden has cracked those defenses in the past. The thigh injury is likely hampering him. As long as he gets healthy, I have little worry that James will return to getting us Harden excited.

A team player? What? It’s good to see Melo contributing when the shot isn’t falling. With that said, he’s been a top 200 player over the past six games, primarily due to the 37% shooting from the field. Has he hit the wall? Something to monitor.

In 26 minutes off the bench, which led the second unit. Over the past six games, Trent has averaged 30.2 minutes, 13.3 points, 2.8 tres, 2.5 boards, 2.2 dimes, and 1.2 steals. He has been shooting an unsustainable 50% from the field, though. On the season, he’s at 40%. Trent is a low usage player who can contribute tres and a little something something in the boards, dimes, and steals departments.