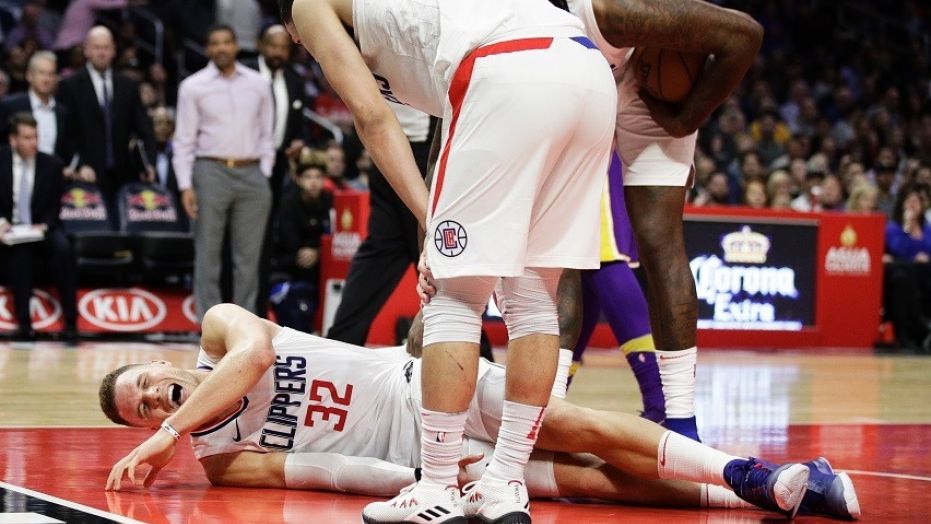 I am back from a short hiatus with an up-to-date (or as close as I can get it) injury report to help you plan for the upcoming fantasy basketball week and to provide potential waiver wire replacements.

Blake Griffin’s knee injury is the classic “not-as-bad-as-it-could-be” news. For Griffin owners, the news is just straight up all bad. The MRI on Griffin’s left knee revealed no structural damage, but the MCL sprain could keep him out up to two months. With a 7-11 record, the Clippers are not exactly running other teams off the floor, so most experts agree they will not be rushing back the only star likely to be left on the team by the end of the season.

7-11 records tend to end badly. Just ask my high school friend who set a 7-11 record for the most Slurpees consumed in less than ten minutes. He tried to hold his head over the hot dog warmer to get rid of the brain freeze, but the sleeve of his FUBU jacket got caught in the rollers and yada yada yada from that point on he could get free drinks and snacks from vending machines.

Wesley Johnson will remain a nice add in most leagues and Danilo Gallinari will get extra minutes at power forward when he gets back. Otherwise it will be a committee replacing Griffin and, in the fantasy world, “committee” is another way of saying “avoid.”

The big-name injuries are piling up and Wall is yet another first-rounder with the dreaded “out indefinitely” tag. Wall was originally estimated to miss two weeks (just over a week ago), but he was quoted the other day saying, “I kind of really don’t know yet. I’m just taking it day-by-day.” He then unexplainably added that his favorite TV series of all-time was “Step-by-Step.” This does not really give us a better of idea of the severity of his knee injury, but it does tell us that at some point in his life he has suffered a head injury.

Tim Frazier has blown his opportunity at extra minutes, but Tomas Satoransky, has averaged over 14 points in his last two games: Czech-Mate.

Whiteside’s MRI revealed a second bone bruise and he was quoted as saying, “I won’t play again until it is completely healed.” He added that he expects to miss “weeks” and not “months” with this injury. So hopefully Whiteside is back out there towards the middle of the month. Bam Adebayo could be a good source of defensive stats and Kelly Olynyk could add some extra Y’s to your fantasy roster.

This injury also reminds me of a joke: You know what you tell a knee with two bone bruises? Nothing, you already told it twice.

I was just thinking the other day that the only body part that Anthony Davis has not seemed to hurt is his groin. Oops. My bad, jinxed it. Also, please do not ask why I was thinking about A.D.’s groin. Davis was on crutches this weekend and the Pelicans have not yet released a timetable for his return to the court. Davis owners should already have a back-up plan ready, but in case you were wondering Dante Cunningham is the add for boards and blocks and Darius Miller is the add if you need threes: THRAGNOF!

It seems like Conley’s rehab for a strained Achilles is going well and he has even progressed to “on-court activities.” Nobody has said what these activities were, however, so it may have just been his turn to follow Marc Gasol around with a mop.

‘Cuz I’m a Joker, I’m a passer, I’m a three point shooter, Now I find it hard to ru-uh-uh-un….The Nuggets may want to convert half of their locker room into an emergency room since their entire team seems to have been injured at some point this season. The latest victim of the mile-high curse is our favorite modern-day center (ok, second favorite, sorry Joel Embiid). MRI results were negative, but I am positive he will be out almost all of this week.

Mason Plumlee looked somewhat decent on Saturday, but it was the weekend and I had a few drinks, so I definitely had beer-goggles on. He did still look ok on Sunday morning, however, so I may send him a text in a few days. Wilson Chandler is due back soon (as you will see down in the lower tier of injuries) and he may be able to finally capitalize on all he extra playing time he will get.

Yep, you read that right, the rookie has achieved “Stash duh!” status. Collins was really playing well before this freak shoulder injury and with Dedmon going down too, he should get close to thirty minutes per game upon his return (assuming he beats Double D back from injury and he can stay out of foul trouble). I know what you are thinking, “Brent, that’s a lot of ass…uming,” and you would be right to point that out. But as a fantasy basketball blogger, it is my job to be an ass…umer.

The other Plumlee will benefit from this injury, but the three potential pick-ups here are: Ersan Ilyasova, Luke Babbitt, and DeAndre Bembry. Babbit is your THRAGNOF!, but Bembry is the long-term, high-ceiling grab.

Dedmon had been playing like a starting fantasy center this season, but this whole broken leg thing has kind of ground his run to a halt. I believe Dedmon is worth stashing, even if you do not have an I.R. spot, but I understand that if you are in a head-to-head league that you may want to cut him loose.

Same pick-up advice as you read in the Collins blurb, but I will add Mike Muscala as someone to watch once he returns.

Russell has been travelling with the Nets on their road trip, but not because he is close to a return, but because he collects spoons from around the United States. The Nets expect Russell back this season, but that is about as much clarity as we have received so far. I get more clarity from my girlfriend when I make the mistake of asking, “What’s wrong?”

Spencer Dinwiddie has emerged as a waiver-wire all-star, so if he happens to be available in your league, then you should call the other owners to see if they are alive.

Still expected to be out for the season, but you never know, maybe he is stuck in a Groundhog Day time-loop and he will figure out how to land without breaking his leg. Then everything we have done since then will cease to exist because Gordon Hayward is the only human being on Earth who matters.

LaVine has been assigned to the Windy City Bulls of the G-League and 50 Cent has named him an honorary member of the G-Unit. He should start practicing with the regular Bulls pretty soon, so if some owner got impatient and dropped him, then grab him now because he is close. Just expect him to have his minutes managed at first, but by early 2018 he should be back up to speed around the same time I will already have abandoned my New Year’s resolutions.

The Cavaliers have announced that Derrick Rose will be rejoining the team and will start rehabbing his injured ankle. They said that he was feeling down, but he went out and bought a Corvette and now he is feeling cool again.

Rose could be helpful to some owner, but it will not be me.

The Cavaliers should also be getting Big T.T. back soon as well. The team announced that they are expecting Thompson back next week sometime. You probably should not have been stashing him, but if you have, then you might as well wait to see how he does since your team is probably terrible.

I had been recommending Curry as a stash option all season, but for whatever reason his return date just keeps getting pushed back farther and farther. He should return in December and he will be a pretty decent fantasy play.

Millsap had surgery on his left wrist and the bad news is this will keep him out for “several months.” The good news is that it is his left wrist so he will not have to switch-hit while he is stuck not playing basketball.

Kenneth Faried and Wilson Chandler are the adds here.

Chandler is close to returning and should be a good replacement for Millsap. The problem is he was playing like garbage before hurting his back, so hopefully this injury leads to a Rookie-of-the-Year-like increase in his ability.

Milos is practicing with the Clippers’ G-League team and he is hoping to be back with the big club next week. Teodosic is definitely worth the stash since they will need someone to play basketball on this team.

Chandler Parsons – Even Stevie Wonder saw this one coming

Hardaway has been diagnosed with a “stress injury.” The only cure for a stress reaction is rest, so this could be a while. Hardaway is definitely not the only New Yorker dealing with stress.

Courtney Lee and Doug McDermott should benefit the most, while Lee should probably be owned.

Porzingis should only miss a game or two, so no need to panic. Michael Beasley is the short-term pick-up since he scores a ton when given a chance.

I love Isaac as a pick-up right now. His upside is crazy high as he contributes across the board in fantasy. Terrence Ross going down for an extended period will open up a ton of playing time for the kid once he gets back on the court, which should be by next week.

Hood is still not practicing and will miss his fourth straight game. He is a stash in my book, but my book is mostly pop-up pictures and easy-to-solve mazes. Alec Burks is the add here as he has been awesome the last few games.

Leonard is in the “final stages of his recovery,” so patient owners will…..just have to stay patient because what does that even mean? He should be back in the next few weeks, which is injury report speak for “who knows.”