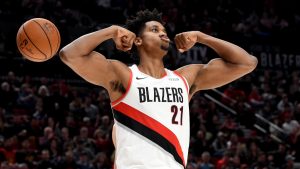 There are many different types of volcanoes. Cinder cones are the most common and are fairly small in both diameter and height. Stratovolcanoes are layered with lava, ash, and unmelted stone. These erupt with great violence because pressure builds in the magma chamber then…KABOOM! Like a shaken bottle of soda. Shield volcanoes are massive, with a huge base and gentle sloping sides. Eruptions are not explosive like stratovolcanoes. Instead, lava just flows out over the sides. Think Mauna Loa in Hawaii. Hassan Whiteside aka Mt. Whiteside is no cinder cone, as he stands 7′ 0″ and weights 235 pounds. He’s more stratovolcano due to his explosive performances in the past. Back in November of 2018, Mt. Whiteside erupted for 29 points, 20 boards, and 9 blocks! It was the consistency that was lacking, though. Sometimes it was injury, other times it was being in the coach’s doghouse. This season, though, Mt. Whiteside has been a hybrid shield/stratovolcano. Last night was the most recent example:

He’s been erupting on the regular, but it’s felt like fantasy goodies have been just oozing over the edge, producing a fantasy island of extraordinary magnitude. Beep. Boop. Bop. You know what oozes fantasy goodies on the regular? The Stocktonator. Mt. Whiteside is the #6 player for fantasy on the season. Points, boards, blocks, excellent field goal percentage, and the free throw shooting has been a robust 76%! I doubt Jusuf Nurkic returns and makes Mt. Whiteside dormant, so enjoy the nightly eruptions.

Only played 22 minutes because he injured his back in the third quarter. If he misses an extended period of time, then it’s time to go back to the garage and dust off Jabari Parker.

Just another Trae Day. Nothing too manic, though. Tons of points, dimes, turnovers, and tres. The usage rate is 34.5 on the season and sometimes ticks up to 38. If Collins misses time, that could become the regular.

Played 39 minutes. Huerter is a good shooter, but the numbers tell a different story. On the season, he’s shooting sub-40%. In his rookie campaign, he converted 42% of his attempts. I have optimism that he can shoot a higher percentage, but as my momma always said, potential don’t mean [email protected]#t. Regardless, I still like Huerter for fantasy. He plays a ton of minutes in a fantasy-friendly environment. He plays alongside Trae, so he will get plenty of good looks. He’s not just a 3-and-D player, though, as he will grab some boards and dish out over 4 dimes per game.

Got the start and played 36 minutes because Kemba Walker did not play due to an illness. The shooting efficiency is always an issue for Smart, even when his eye is working properly. He needs to get sent back to the lab and get recalibrated. Or get upgraded with the I3000 bionic eyes with HUD. For fantasy, he provides tres, boards, dimes, and defensive stats.

It warms my heart to see Brown ball out like this. Especially since I don’t have to back into the Razzball archives and delete all the things I’ve written about him. Yes, I called him Kawhi 2.0. I’m not drawing dead. At least not yet. So, coming into this season, the shooting efficiency was the biggest bugaboo for his game. Well, he’s stuck out both middle fingers to that. As a result, he’s a top 40 player for fantasy. The next frontier is to dish out more dimes and get his Mutombo on. If he can do that, then Kawhi 2.0 won’t be far away.

In 24 minutes off the bench. Where have these blocks come from? Maybe it’s from blocking all the pro-Turkey government trolls on the Twitter machine. Whatever it is, he needs to bottle and sell it. Prior to this season, Kanter had never averaged more than 0.5 blocks per game. He’s at 0.9 currently and has gone through stretches of blocking over 2 per game! He’s always been a dub-dub machine, so with the added blocks, he’s been a top 35 player over the past six games. With Robert Williams still nursing a hip injury, Kanter should continue receiving around 21-23 minutes per game.

Granted, it was against the Wizards, who are THE worst team in the league, but whatever.

The numbers on the clock show the same thing, regardless of the day, month, year, emotional state of mind, weather, distance from the Equator, whether we are at war or peace, etc.

Isaiah Thomas got ejected fourteen seconds into the game….SMH.

In 33 minutes off the bench. Bradley Beal didn’t start due to a leg issue and because it was a back-to-back set, so McRae was expected to be the primary scoring off the bench, with Troy Brown Jr. moving into the starting lineup. The stars aligned for McRae due to the IT ejection, so he soaked up some extra run. When he’s on the court, Jordan channels his inner Jordan and gets shots up. Over the past four games, he’s averaged 32 minutes, 24.8 points, 4 tres, 5.3 boards, 3.8 dimes, and 1 steal. He’s a good shooter, as he’s converting 47% from the field and 80% from the line on the season. When the Wizards get healthy, McRae goes back to being bench fodder and playing around 21 minutes per game.

On the season, Butler is a top 20 player, but over the past 15 games, he’s been a top 50 one. Nothing to worry about, though. He’s been solid and all the numbers are close to his season averages. The shooting efficiency vacillates from time to time and other players go on heaters.

Wham, Bam, thank you, ma’am! I don’t hit it and quit it, though. I’m in it for the long haul with Bam. One of my favorite players in the league because of his versatility. He does the normal big man things like rebound and block, but he has guard handles and can dish out dimes while Euro stepping around defenders. Top 35 player for fantasy on the season. He doesn’t provide tres, but if he can improve his free throw shooting, top 25 wouldn’t be out of the question.

With Jonathan Isaac out for a few months due to a knee injury, it was Khem Birch who replaced him in the starting lineup. He produced 2 points, 1 board, 2 dimes, and 1 block. The answer to your question is no.

Chugga chuga chugga chuga chooo chooooooooo! The Vuc train has slowly but surely been picking up steam since leaving the station. He’s top 25 on the season. Next stop….top 20. The only question is if he can replicate last season’s #11 finish.

In 25 minutes off the bench. Ross is a two-dimensional player: points and tres. Unfortunatley, most leagues consist of eight or nine categories. With that said, Ross is good at what he does, albeight with some inconsistency. If you need points and tres, visit Ross. Just know that it’s a discount store, so you will often leave empty handed.

The numerology nerds just all nutted onto their spreadsheets! Over the past six games, Randle has been a top 15 player. Dayam. He’s always going to provide points, boards, and some dimes, but if he contributes tres and defensive stats, then no one will be stabbing this Julius in the back, front, or side.

Shams Charania of the Athletic reported that, “Morris has expressed publicly and privately his desire to stay loyal with the Knicks, and the team is said to prefer to keep him.” No shit! Morris is having the best year of his career and jacking up 14 shots per game. And he’s getting paid while living in NYC. As for the Knicks….they continue to start Taj Gibson at center, so that’s all you need to know. Dummyheads. If Morris does stay with the Knicks, then he will continue being a fantasy asset, providing points, tres, and boards.

He’s the starting point guard for the Knicks. The points won’t be voluminous, as the shooting efficiency has been bad, but that should improve and will be a nice addition to the boards, dimes, and steals he will provide.

In 20 minutes off the bench. Portis will pop off from time to time, but he doesn’t get the run to be someone you can trust for fantasy.

In 40 minutes! Over the past seven games, Oubre has been the #11 player. He’s been shooting 54% from the field! That’s not going to continue. He’s more like a 45% shooter. With that said, he provides points, tres, boards, and steals. He’s top 35 on the season and will likely finish in the top 40-50 range.

Got the start and played 29 minutes, alongside Deandre Ayton. That is an encouraging sign. We just don’t know if it’s the N. W. O. If he does get consistent run, Baynes can provide some points, tres, boards, and a smidgen of blocks. The percentages are excellent for a big man. He is an excellent passer as well, averaging 2.2 dimes on the season.

Played 37 minutes. I like him Ayton, as he will provide points, boards, dimes, and blocks with excellent percentages. He’s still getting back into the groove and has been a top 100 player for fantasy. More than likely, health permitting, Ayton will finish as a top 10-20 player.

Such a baller. A professional getter of buckets. Booker can score on anyone, but he also dishes out dimes. Top 35 player for fantasy. Unless he improves in the defensive categories, he will be stuck in this purgatory.

Favors was injured earlier in the season, but is finally doing what we all expected. Points, boards, some dimes, and defensive stats should be plentiful. The field goal percentage will be excellent as well. The only bugaboo is the piss poor free throw shooting, but it’s on low volume so the impact is mitigated somewhat. He’s in one of the most fantasy friendly environments, so as long as he stays healthy, top 40-ish production is a reasonable expectation.

Played 33 minutes. He has now played 33, 40, 30, and 36 minutes over the past four games. Oh, it’s on like Donkey Kong. The shooting efficiency is always a concern, but Ball will provide points, boards, dimes, and steals when given the run. The Pelicans play at the sixth-fastest pace, which is the perfect environment for Ball’s skillset. Just wait until Zion returns!

Played 29 minutes off the bench. Over the past five games, Moore has received 29, 25, 20, 22, and 24 minutes of run. He looks to have carved out the role of microwave off the bench. Strictly a points and tres specialist, Moore has been jacking up over 12 shots per game.

There’s nothing to say or write. He is that good.

LeBron is leading the league in dimes by a wide margin. He’s the only player averaging over 10 (10.9). Ricky Rubio is in second with 9.3. He and AD are the perfect couple. There was Brangelina back in the day. LeBronthony? Anyways, for fantasy, LeBron is the #11 player on the season. High turnovers and below average free throw shooting are the only things keeping him out of the top 5.

Oh, Danny boy has scored at least 20 points in three games this season. He’s scored in single digits 23 times. Yipee! Our Danny boy is a 3-and-D player, and not a particularly good one. Don’t get fooled just because the color of money is green.