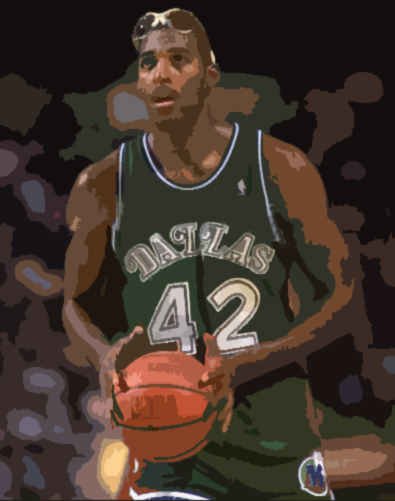 With fewer than three weeks until the start of the NBA’s 41st season, we’re previewing all 25 teams. Whatchu say? Twenty-five teams? Yup. We’re looking at every franchise in addition to shining a light on the new Eastern Conference expansion Charlotte Hornets and Western Conference expansion Miami Heat. And if Charlotte’s more East than Miami, I’ll apparently be previewing the new United States map. From now until the start of the season, we’re bringing you the 1988-89 Fantasy Team Previews, which will focus on each team in order to paint a clearer fantasy picture. Razzball‘s got all the ins-and-outs of the season covered. Who’s new to each team, who’s old (Kareem!), and how are you possibly going to compete with whoever takes Jordan with the first pick of your draft? Unless the first pick in your draft belongs to you, in which case, turn off your IBM PS/2, kick up your feet and put your fantasy roster on cruise control. Next up – The Dallas Mavericks (… and no one else, as there is no time).

Surprising Team Fact From Last Season – Usually teams leading the league in rebounds don’t also rate as well in efficiency categories like turnovers and personal fouls. Just as usually when a girl is pretending to ignore you in a bar, she’s actually just ignoring you. But every once in a while the girl’s playing hard-to-get and the team with the second fewest personal fouls and third fewest turnovers grab more than 3,800 rebounds. Go figger.

1. Is Rolando Blackman a fantasy third option or just a third option for the real-life Mavericks gang?
Talk to most Mavs fans and they’ll tell you three things: 1) Ro’do ain’t the Mavs’ best player, 2) but he is their favorite player and 3) they’re drunk. Take that however you’d like, but a 19/4/4 guy with great percentages will be gone by the 40th pick whether you grab him or not. If he’s available after the 30th pick, Roll on ‘Do.

2. Detlef? Deadlift? Deadleg? Deadweight?
I actually kinda like the guy. I think he plays well when he’s on the court (as opposed to the players that play better off the court. I’m lookin’ at you, Magic Johnson. Play on, playa). I just don’t think he’s getting much p.t. on this team. And if I hadn’t already decided on a different fantasy sleeper, I might consider Shrimps. But I have, so I won’t.

3. The Kareem is dead. Long live Roy Tarpley?
I don’t think you can make a statement, end it with a question mark and treat it like you’re awaiting information. I’ll answer you anyway, but you italics gotta get it together. Tarpley averaged six more points and five more rebounds than he did his rookie season. Growth like that doesn’t happen everyday … unless you’re Ben Johnson. What? I kid, I kid. I shouldn’t joke about drug use. What does substance abuse have to do with Tarpley, anyway? I expect big developments from Tarpsicord, maybe not Kareem big, but pretty big. He averaged 13/11 last year. I’m predicting 18/12 this year I’m also predicting that in six or seven years, I’ll look back on this Tarpley and marvel at how far he’s come.


Rookie Review! – Morlon Wiley (no. 46 overall). You’d hafta be a real morlon to take the 46th pick in this draft for your fantasy team. (Wordplay courtesy of Henny Youngman)


Fantasy Disappointment in ’11 – Sam Perkins. Big Smooth, by most accounts, took a step back last season despite being healthy and given more than 32 mpg to shine (33.3 to be exact). I think Tarpley’s got a big season coming. Big enough to make everyone overlook Perkins. It’s like being back in college, huh, Sam?

Biggest Fantasy Contributor in ’11 –Mark Aguirre. His only discernible backup is rookie Morlon Wiley. Blackman might slide over to the two for stretches, but as long as Aguirre is healthy, there’s no reason to think he won’t average more than last season’s 34 mpg, in addition to his 25/6/4

Fantasy Sleeper – James Donaldson. Dropped a 7/9, with 1.3 bpg line all last season. Not a bad get with your final pick. When Donaldson dies, this will be the line they etch onto his gravestone. But Donaldson’s averaged 9.1/8.0, with 1.5 bpg for his career, Adam. Why would they etch an incorrect line onto his gravestone? I don’t know, disembodied voice. Why don’t you quite hasslin’ me?!