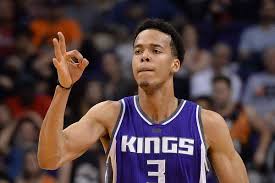 Hassan Whiteside missed yesterday’s shootaround. As a result, those who traveled from all corners of the Earth to witness a Mt. Whiteside explosion became despondent. They cried. They fainted. They cried some more. Then they all gathered around and sang Kumbaya. Because Joe forgot the drums and Sally left the flute in the hotel room, singing was eschewed for the more conventional Lord’s Prayer. As the group began to feel hope permeating throughout their bodies, they heard a voice over the PA: Ladies and gentlemen. Tonight’s starting lineup for the Portland Trail Blazers will be….Gary Trent Jr., Rodney Hood, C. J. McCollum, Anthony Tolliver, and Carmelo Anthony. Shrieks began to echo througout Fiserv Forum. Joe and Sally began to makeout because the end was near. But then with 4:52 left in the first quarter, Skal Labissiere checked into the game. And all was right with the world, as the expected Mt. Whiteside explosion was superseded by the Labissiere eruption.

In 28 minutes off the bench. Now, prior to last night, Skal was averaging only 15.3 minutes per game, but with all the injuries, he could be entrenched as the backup to Hassan with the possibility of becoming the Messiah? Beep. Boop. Bop. You know what’s Messianic? The Stocktonator. Naw, but 20 minutes per game with the occasional start wouldn’t be a bad thing. I know. I know. We’ve been down this path before with Skal, but fourth times a charm? Look, Skal is a skilled offensive player who has range from downtown. And he gets his block on. I’m good with taking a chance on the upside. Why? The Blazers need shooters on the floor so the path to more playing time is there. They signed Carmelo Anthony for goodness sakes.

Played 29 minutes in his second start of the season, an increase of five minutes from the first game. It feels dirty rostering Anthony, but if you need points and tres, he’s a decent option. He’s going to play a ton and the usage rates in the first two games have been 28.2 and 35.7. The great thing about rostering Melo is that it’s an all or nothing proposition for the Trail Blazers, in that he’s either going to play a shit ton of minutes or he’s off the team.

Played 38 minutes and, with Damian Lillard not playing, was the man. Let’s go to the highlights….

Wilt Chamberlain and Russell Westbrook are the only two players in the history of the NBA to log a 20/20/20 game. G will be the third at some point. Once he gets the whole shooting thing figured out, it’s game over.

It’s been an up-and-down season for Bledsoe, primarily due to the shooting efficiency. The steals are also down significantly from years past. Once he irons out those issues, he should return to the top 50 player, as the rest of the counting stats look good.

In 22 minutes off the bench. Will get run and provide points, tres, and some boards for as long as Khris Middleton is out.

Second game back from injury and…..across-the-board production once again. Points. Boards. Dimes. Blocks. Steals. Tres. You want it? Ingram provides. The improvements in tres and defensive stats have been eye-opening. 2.4 tres so far this season after never providing more than 0.7, and he has a chance to join the 1/1/1 club. Amazing.

29.2 usage rate last night, which is encouraging, but Brandon Ingram had a 35.1 usage rate. Regardless, Jrue is back from Holiday and contributing that across-the-boards production. Blocks are a little light, though.

Played 19 minutes in his return from injury. I can’t wait to see this Pelicans squad when everyone is healthy, especially with Lonzo guiding this fast-paced offense. When healthy, Lonzo will provide tres, boards, dimes, and steals. The percentages will be gross, though.

Played 26 minutes off the bench. Basically, scroll up and re-read the Redick blurb, then copy and paste it <here>. The only thing that changes is the numbers.

With Aron Baynes out, Kaminsky received the start and center, but only played 24 minutes. The Tank has a long-range cannon to deliver munitions from far away. Like a tank, limited agility and one-dimensional.

Played 14 minutes backing up Kaminsky at center. If Kaminsky played 24 minutes and Diallo played 14, how many center minutes were left? Class? That’s right, 10. Dario Saric only played 16 minutes, so the Suns have been going small with Baynes out of the lineup quite a bit. The primary beneficiary has been….

Played 36 minutes off the bench. This after playing 26 minutes the prior game. Prior to that, Bridges was only averaging 19.5 minutes of run. Now, he’s a low usage player who will grab some boards and get his 211 on. In addition, he’s getting run due to all the injuries. I don’t have much confidence in him going forward. A streaming option when the Suns have injuries.

Got the start for Ricky Rubio (back) and played 29 minutes. This Johnson did not cause any fantasy erections. And probably won’t for the foreseeable future.

Played 35 minutes. Top 40 player over the past three games. Oubre can score points, shoot from downtown, grab boards, and get his 211 on. The turnovers are low and the free throw shooting is sublime. Now for the bad. The shooting efficiency from the field isn’t great and the blocks are low. I don’t think he will ever be a knock-down shooter, but he won’t atrocious either. The blocks, though. Was last year’s 0.9 number an outlier?