At 6:00pm on the last day of June, the NBA’s version of musical chairs started in theory. There were at least 20 top-level players targeted to change uniforms during the 2019 free agent signing period. There were 10 top-twenty players in this crowded free agent field.

As the dust from the 2019 free agent bonanza settled, a lot of surprising things happened. Three or four of these moves will have a huge immediate impact. One may take another year to unfold. However, one player created a domino effect that has everyone abuzz. Here’s how we think the outcomes could affect the 2020 pursuit of the NBA Championship. 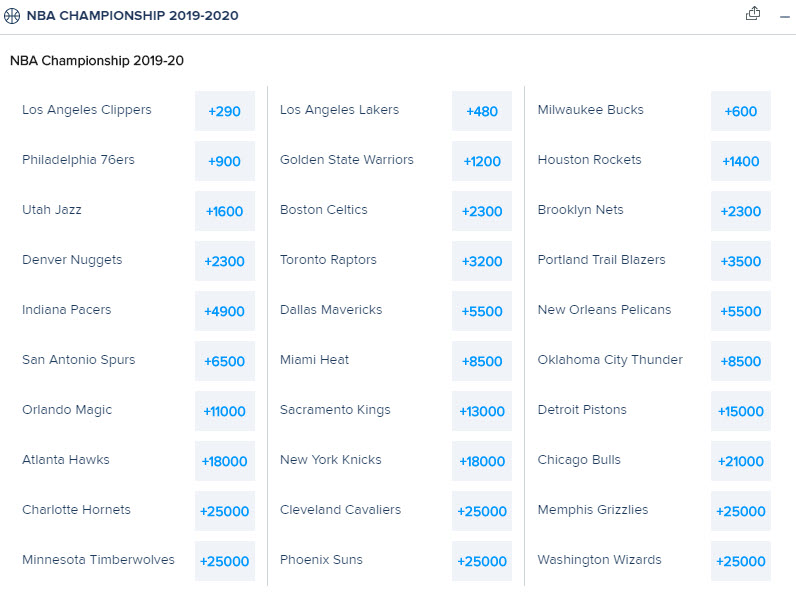 Sports Betting Update: Sports betting is now legal in NY, PA, NJ, NV, WV, MS. If you’re in NJ, you can bet on NBA futures on FanDuel or DraftKings. During the NBA season, one of the most unique websites is PointsBet. Lineups.com has an exclusive PointsBet promo code that gives you up to $1,000 in free bets.

A One-Year Lease on the East

When Durant chose to link up with Kyrie in Brooklyn, the Nets immediately became a viable contender in the Eastern Conference. However, that pairing will not materialize until a season has passed. In the meantime, the Nets still have enough fire power to warrant +2300 odds matching the Celtics and Nuggets. Seems too good to be true without Durant.

In the meantime, Philadelphia has to be the lead dog in the race for the East’s spot in the 2020 NBA Finals. The signing that changed the course of things in the West also has a trickledown effect in the East.

Toronto is no longer the team to beat. Miami reeled in Jimmy Butler from Philly, but the Boys from South Beach seem to be missing a piece of the puzzle. That piece could be manufactured via a trade. There is some speculation Miami could be in the Westbrook sweepstakes.  Meyers Leonard is another key acquisition Miami made with a trade. However, there are some holes to fill before they can jump from a team four-games under .500 to a contender for the East crown.

With a depleted arsenal heading into next season, Toronto is no longer even the favorite in their own conference. Boston will try to retool with new faces, and Milwaukee did little more than stand guard.

But, Philadelphia made enough noise to at least warrant the most frequent mention as the new beast from the East. Al Horford will take his outside game outside more often. He will make for an unusually difficult defensive matchup with Joel Embiid. The Sixers still finished a full nine-games behind Milwaukee, but by adding a scoring punch in Josh Richardson, they certainly have the talent to make up that much ground. As the dust settled on the seventh day of 2019 free agency, the Bucks will still be strong, but the Sixers may have signed on for a one-year lease on the East.

Tried to Blaze a New Trail in the West?

As the week long wild ride started back on June 30, Portland grabbed the early attention. The Trail Blazers finished one-game back of the Nuggets in the Northwest Division, and four-games off the pace for the number one seed in the West.  They will be without one of their key post players until probably close to February. Jusuf Nurkic was Portland’s incumbent center, but they added Hassan Whiteside. Whiteside will man the post alone until at least the first of the year.

Kent Bazemore came on board from Atlanta. There was an odd amount of excitement over the inking of Anthony Tolliver and Mario Hezonja. Both have been little more than role players at this juncture in their careers.   Portland will have depth and balance, but for all the excitement they kicked up at the beginning of free agency, they seem to have been steamrolled by the LA Express. Two teams first needed to lose for the pair of LA teams to be the big winners.

For the all the surprises we still have to discuss, one perplexing thing that happened is something that actually didn’t happen. Houston and Golden State were thought of as the best two teams in the Western Conference a year ago, and both were top-four prior to last Sunday.

Golden State started to watch their dynasty team fall apart as Kevin Durant decided to leave the Golden Gate State and announce, Yo’ Brooklyn. The Warriors took on DeAngelo Russell from the Nets, adding essentially a third splash brother to the mix. A backcourt of three shooters now seems a rather crowded place. Boogie Cousins never did materialize for the Warriors either. His love affair was short-lived. While the Warriors seemed to lose talent, Houston and Denver both made few changes at all. The biggest noise out West certainly was the loudest noise of the week, and it came out of LA.

Yes, you read that heading correctly. With the biggest trade and the biggest free agent acquisitions, the pair of Los Angeles pro basketball teams made the biggest waves this off-season.  It is improbable that anything left on the board could counter two of these moves. One went to the Lakers, and then a pair of late acquisitions by their cross-town rivals seemed to trump the signing of the Brow.

The LA Clippers gave Oklahoma City the house, the car and the barn for Paul George. While it seemed like an awful lot to hand over for one player, albeit a star, it turned out to be the move that secured the second piece of the puzzle.  Almost like clockwork, the Clippers stole the most-coveted prize in this year’s free agent pool. The Kawhi Leonard move following up the Paul George trade had Clipper consultant Jerry West’s fingerprints all over it.

Like George and Leonard choosing to go up against LeBron James, it appears West has a knack for sticking it to his old team. The Clippers have two players who can torment even the best player in the game. DeMarcus Cousins health will be an important key to how good the Lakers will ultimately prove to be. But, including Patrick Beverly’s glove-like blanket defense, it will be hard to run-and-gun on the Clippers. Oh, and they’ll be able to score the ball as well.

Before we hand the Larry O’Brien trophy to Kawhi Leonard and company again, we will do well to see how good the other team in Los Angeles turns out to be. You have to figure that LeBron James may have somewhat of a chip on both his broad shoulders.

He has nearly vanished from the limelight after Leonard and the Raptors disposed of James’ dreaded finals’ rivals the Warriors. This man is used to be the lead topic of discussion in the NBA. He’ll have another cast of superstars around him reignite that discussion.

What’s strange about this whole LA dominance talk is neither team will be an up-and-down-the-court, fast-paced type of offense. George, Leonard and Beverly are prototype lockdown NBA defenders.

With Anthony Davis, Cousins and role player JaVale McGee, the Lakers will have one of most formidable front lines in recent years. The funniest part of this whole 2019 free agent discussion and how it will affect next year’s championship may key on two unheralded signees.

The Lakers stole two pieces of the Warriors puzzle. Not only did Cousins join up with Davis and LeBron, but Quinn Cook will earn important minutes off the Laker’s bench. In addition, they landed the consummate professional in Danny Green. Green played key minutes, producing key results in the Raptors’ run to the championship. Green has now acquired a pair of NBA rings, counting the one he won with San Antonio.  Lineups.com has the updated Lakers starting lineup, which is updated daily.

Of course, since we’re talking about final thoughts on next year’s NBA Finals, then these would fall under the category of lofty projections. Milwaukee did little but lose a couple fringe players, so the Bucks will be good, again. Miami is a work in progress, but the lease on the East should be the Sixers’ for the taking. Now, what about the NBA West? For the first season in many, the Warriors will not be the favorite. Likewise, the Rockets will not be their most viable nemesis.

Denver really likes the team they have in place, but can that team play at the level they did last season is the question. There is no question about one thing, however. Both of the Los Angeles teams are not planning on playing second-fiddle next year.

The Lakers still have the best player in the world. They now have as formidable a frontcourt as there is in basketball. But, right across the LA Freeway is another team with someone who thinks he should be part of any best-player-on-the-planet discussion.

Kawhi Leonard a superstar partner heading into next season as well. It would be easy to ink the Lakers and Clippers as front-runners out West, and for winning the 2020 championship as well. One thing that might be a sound investment would be NBA Western Conference Finals tickets at Staples. It could turn into a hometown affair.