In his mammoth tome, The Book of Basketball, a work I begrudgingly call both comprehensive and wholly entertaining, Bill Simmons shares the theory that 24 is the pivotal age for athletic shooting guards. He uses Jordan, Bryant, McGrady, Wade, a 25-year-old Iverson (lost five months as a high school senior sitting in a jail cell) and David Thompson as examples. It wasn’t really a theory so much as a limited observation. Simmons admitted he wasn’t sure why 24 offered peak seasons for some of the league’s best all-time shooting guards, it just did. I’d go one better, or maybe just one broader, and say that a player’s third or fourth year in the league allows for the same type of gauge. I’d also extend the rule across all positions, because I’m nothing if not all-inclusive. Think of Kyle Lowry in 2010 or Rudy Gay, Wesley Matthews. Whether a player jumps to the pros at 19 or at 22, few enter the NBA as ready-made contributors. It takes dozens of late-night Red Lobster runs fetching Gerald Wallace his Cheddar Bay Biscuits, or Grant Hill foot rubs, or thrown games of Words With Friends against Reggie Evans (who is neither friendly nor particularly wordy when it comes to that game – or any game probably) before a youngster can acclimate to the league. And if the youngsters aren’t pre-loading the newest Sade joint onto Udonis Haslem‘s Zune, they’re learning the team’s system, packing on muscle, slowing the game down, working on timing. They’re baby deer learning to walk. If they’re just fawns, they won’t be surefooted. If they’re still shaky as 3-year-old bucks, the thing might be lame and you should look to trade it and throw Michael Redd in for good measure.

Below are the players with fewer than five seasons and turning 24 next year most likely to ignite their young careers: 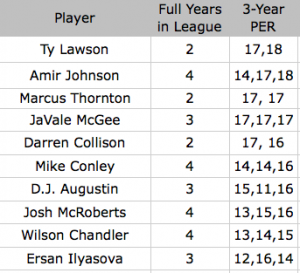 NOTE: I ordered these guys by last season’s PER rating, taking into account playing time and years in the league; giving more credit to players with less experience under the prediction that they are more likely to make a larger qualitative leap than the more experienced player. I wouldn’t necessarily draft these guys in this order … but, with the exception of Chandler being too low because of injury and misuse on Denver, this isn’t a ridiculous prediction of how good the incoming 24-years-olds are going to be.

It’s also worth noting that Andrew Bynum turns 24 next season. He’s played at least 35 games in six seasons and didn’t quite qualify for this list. Although if Iverson qualifies at 25 in Simmons’ list after wasting precious months of his life in a holding pattern, Bynum should probably qualify too. Whatever. I’m still miffed at the classless way he ended his season and the crap-full way he’s going to start his next one.