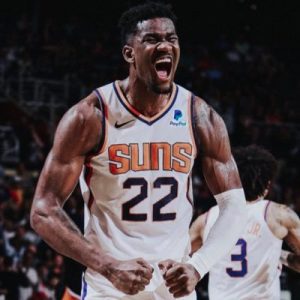 The Phoenix Suns liked Deandre Ayton during the 2018 NBA draft. So much so that they drafted him with the number one overall pick. In hindsight, the pick looks silly because they selected him over the likes of Luka Doncic and Trae Young. If you look at the Suns history of drafting in the first round, it makes sense why they selected Ayton.

Luka and Trae both had some perceived risks. Ayton was the safe pick because he was a big man who could shoot. Now, Luka should’ve been the pick, but it’s not like Ayton is a bust. Last night was an example of the fantasy goodies he can provide.

Prior to last night’s game, the Suns were bringing Ayton off the bench, like a bunch of bobos. Regardless if he starts or comes off the bench, though, Ayton produces. Over the past seven games, he’s averaged 32.9 minutes, 18.1 points, 11.9 boards, 2.1 dimes, and 1.7 blocks. He’s converted 58% of the 14.1 shot attempts and shooting 78% from the line. That’s been good for top 30 production for fantasy. He can score down on the block or from the top of the key. The stroke is pretty. Is he a transcendent player like Luka? Negative, but he’s very, very good and could finish as a top 15 player. Beep. Boop. Bop. You know what is transcendent like Luka? The Stocktonator.

Hey, Ricky! You so fine, you so fine you blow my mind, hey Ricky! Rubio is second in dishing out dimes at 9.3 per game. Not bad for one of the later point guards being selected in drafts. If only he could shoot from the field. Top 60-ish player for fantasy is where he will likely end the season.

Over the past three games, Randle is converting 90% of his 3.3 attempts from the free throw line!!! That’s big news because he’s a 70% shooter on the season. What won’t be news is when the he reverts back to being a 70% shooter from the line. The points and boards will always be there from Randle. It’s the tres and steals which have been illuminating. I’m not buying the steals but the improvement in tres looks to be real. Now, he’s a good passer and want to say that he will mess around soon, but the Knicks suck, so how will he get the necessary dimes?

R. J. Barrett only played 14 minutes because he sprained his ankle. Damyean Dotson will likely be the primary beneficiary if Barrett misses time.

In 30 minutes off the bench. WTF! Do we need Jackie Robinson to slide into Miller’s office in order to get Mitchell Robinson into the starting lineup?

In 42 minutes, as the game went to OT. Tied a career-high in points! Man, I’ve only written up Mitchell a few times this season. Not because he wasn’t performing well. More because he was so good and consistent that it was meh. That’s the sign of a true star. Anyways, the usage rate is over 30, he jacks up 20 shots per game, and provides 25 points, 2-3 tres, 4 boards, 4 dimes, and 1 steal. The shooting efficiency is great at 46% from the field and 85% from the line. The turnovers are only at 2.4 per game. Top 35-40 player for fantasy.

I should start giving Gobert the Mitchell treatment, as he’s producing these lines every night. Ladies and gentlemen. Please rise, take off your caps, and pay respects to the Stiffel Tower.

Played 36 minutes, a season-high! Over the past six games, Favors has been a top 20 player despite averaging only 27.1 minutes per game. He just needs to stay healthy, as the boards, defensive stats, and field goal percentage will be voluminous like a leaky roof during monsoon season.

A career-high in points!!!! He’s dramatically improved the free throw shooting and tres, while significantly increasing the dimes. He’s also made some strides in the defensive cats. Did I forget to mention that he is now a professional getter of buckets? There are many who sold high on Ingram early in the season. They are kicking themselves. From the group that bought high, I’m sure they thought they were selling high when they did. They are now kicking themselves. Those that bought the highest, what will their fate be? Fantasy glory? We shall see.

Played 42 minutes! Over the past eight games, Ball has AVERAGED 37.5 minutes per game! The Pelicans play at the sixth-fastest pace, so fantasy goodies! The shooting efficiency will likely always be awful, but the counting stats are magnifique. He’s basically Ben Simmons with tres.

A 40-burger! He has another one this season as well, when he dropped 44 on the Pacers back on December 11th. Kemba is a professional getter of buckets. Let’s not forget that he has a career-high of 60 points. On the Celtics, though, there’s too much talent which results in a usage rate of 28. For fantasy, Kemba is a top 30 player on the season.

Got the start and played 36 minutes because Jaylen Brown did not play due to a thumb injury. Smart will pop off like this from time to time. It all comes down to the shooting efficiency because he provides the counting stats on the regular. On the season, he’s shooting 37% from the field. When he’s hot like last night is when Smart delivers ceiling performances.

He’s basically Marcus Smart! I kid, I kid. Once he gets that shooting thing figured out, it’s game over.

How does a player with his height and athleticism not grab one board? No wonder the gods changed his name from Baron. Anyways, the free throw shooting continues to be an issue, as he’s shooting 69% on the season. So are the lack of defensive stats. Top 175 player on the season and….he’s still only 24 years old. Two more years and I’ll have to shelve that line forever.

In 29 minutes off the bench. With D. J. Augustin out, the minutes have ticked up to 30.3 over the past three games. On the season, he’s averaging 25.5. Ross is your discount variety 3-and-D player. He should finish as a top 100 player.

Only played 30 minutes because the Clippers made the Magic….poof….disappear, 122-95. With Paul George out, the usage rate has been 38! He’s been the #1 player in fantasy over the past three games. Small sample size you say? Over the past 11 games, he’s been the number three player. On the season, he’s the #5 player.

In 23 minutes off the bench. Received extra run because George was out and Moe Harkless left last night’s game due to a back injury. If Green gets extended run, he can provide points, boards, tres, and steals. Wouldn’t drop anyone of worth for him, though.

Played 44 minutes in an OT game and aaaaaaaaaaaaaaaaaaaallllllllllllllmmmmmmmoooooosttttttttt mu mu mu messed around quad style. Now, turnovers aren’t officially included in quad-dubs but we are far from official. Over the past 28 games, Jokic has been the #10 player for fantasy. Seems just like yesterday when the people were losing their minds. Some people just can’t take a Jokic!

Played 43 minutes. No Jamal Murray, no Paul Millsap, no Gary Harris, no problemo. Barton is usually about contributing a little something something in every cat, but every once in a while, he will pop up in the scoring department. Don’t expect that on the regular though.

In 29 minutes off the bench. Got extra run to all the injuries. The dimes and steals are a nice outcome, but Porter is primarily a points, tres, and boards player. The main issue is the playing time. It’s inconsistent so it’s tough to rely on MPJ.

In 27 minutes off the bench. Only averages 17 minutes per game on the season, so can’t trust him. When he does get run, though, he can provide points, boards, and defensive stats. He’s also a good passer, so dimes are dished. The free throw shooting is atrocious, though. Anyways, only viable when injury strikes or when you come back from the future.

With Jamal Murray out, Monte Morris got the start and provided 11 points, 3 boards, and 3 dimes in 26 minutes. Malik Beasley went bonkers though:

With Murray and Harris out, Beasley got extra run, especially since he was playing well and Malone went with the hot hands. Tough to trust, as it looked like he was out of the rotation. Someone to monitor, though, with all the injuries.

Returned to the starting lineup and put on a performance that Bruce would have been proud of. There’s a reason why the Warriors decided to convert his contract. Points, tres, boards, and steals are what he provides. He’s averaging over 31 minutes per game, but there could be a teeny beeny bit of upside if D’Angelo Russell does get traded. Possibly some added usage. Right now, that number is at 20.

In 32 minutes off the bench. He’s likely to get traded, which would crimp his playing time and fantasy value.

How do you see Teague’s prospects at Atlanta. He’s been hard to hold since coming out of the starting lineup at the wolves. Any more value in Atlanta or time to move on?

Couldn’t have asked for a better situation for Teague to land in. He will back up Trae, so 12-14 minutes there. I do think they run lineups with both Teague and Trae in the backcourt, so maybe he gets close to 20 mpg. ATL plays at a fast pace, so he will have value. With that said, it’s tough to hold a player that won’t get close to 30 mpg, so probably best for deeper leagues. If you need the dimes, though, then worth a consideration

Sorry to keep harping on this, but I’m town between two players atm. I’m trying to decide between holding EG or dropping him for Ross in my points league. I like EG’s role, but I know he’s suspect to rest games (and being injury prone doesn’t help either). While his 3 point shooting should be more consistent than Ross the rest of the way, I fear his bad games will decrease his value compared to Ross. Throw in Ross’s new role with Isaac gone for the year and his 3 and D ability, would you consider him over EG, or am I splitting hairs here? Thanks as always Son.

Sup Son! I see KAT has been upgraded to GTD. Lol I’ve switched my team name to “quesTOWNable” until he comes back. Also saw PG13 is traveling with the team on their road trip. Let’s hope the hammy is all good by next week. Dropped Nunn this morning for Lee. I like Lee’s road to minutes more than Nunn. Also, put out some feelers for Lowry trades and someone bit. I got Gobert in return. Pretty stoked cuz I was missing blocks ever since Isaac went down. Your thoughts on the moves.

I like that move a lot for you squad. Nice job!

Hope your squad gets healthy and balls out during $$$ time

Yes please let’s hope this is the last of the KAT quesTOWNable saga. Lol probably was waiting for Teague to leave.

Enjoy the games this weekend!

Im planning to move SGA+JV for Bam, what do u think

I love Bam but that particular trade doesn’t make sense for his squad. At least I don’t think so