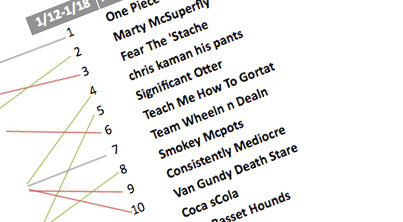 One Piece looks to be an unstoppable juggernaut after the first four weeks of the season, having never spent a week outside of the top spot in the RCL averages ranking as well as the top of his division’s league ranking. Fear the ‘Stache can’t say the same thing, as for the first week, the team fell from second to third.

Team Rich climbed an RCL-high 26 spots from 51st last week to 25th this week. This becomes all the more impressive when you look at his steady incline from Week 1. He started at 59th, improved to 54th, then 51st and now he’s just outside the top 12.

Team Thiele fell the hardest dropping from 18th to 44th. He, like Team Rich, are both in the All-Star Dance-Off ’08 Division. Thiele’s had a string of bad luck. First with Derrick Rose missing most of the last week with turf toe, Boris Diaw going from hero to zero and, of course, Stephen Jackson doing what Stephen Jackson seems to be best at doing these days.

You’ll notice (if you click the pic above) that things are starting to settle. Ten teams remained in the same position this week as they were in last week. The previous two weeks only saw three teams stay put. There’s still plenty of time, but it’s going to be increasingly more difficult to climb the ladder or stay off the chute as the weeks go by. If you’re low, start figuring out where you’re weak and work on tweaking those categories by FA adds or trades. If you’re on top, start looking at who’s behind you and play defensively. It starts becoming more about strategy and less about luck. Although, there’s still a ton of luck involved.

Below is a slope graph of this week’s movement. All RCL scores and averages are stored on this spreadsheet here or download the full thing here. All scores and stats count up to and including Wednesday’s games (Jan. 18).