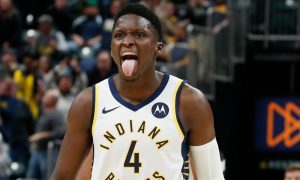 I think it is important to give a breakdown of what a bold prediction truly entails, and how this can be used to your advantage. Bold predictions aren’t absolute outcomes. They are beliefs that an outcome has a likelier chance of occurring than the consensus. Bold predictions are usually off the beaten path, so most will not agree with them. With that said, they do provide fodder for thought and allow you to mine those uncovered gems that are being overlooked by others. So without further ado, let’s look at some of the hot takes, starting with my own:

Victor Oladipo will finish outside the top 140:

When I hear the name Victor Oladipo in fantasy circles, the first words that spring to mind are overvalued, outlier season, injured, and field goal percentage tank. In some discussions I have had, Oladipo has been mentioned as a guy going as early as the 5th round in drafts, which to me just feels like a crazy overdraft and hanging onto the name value of the guy who had one outlier season in 2017/18. Now I am not going to sit and argue against the merits of that All-star caliber season, but alarm bells are ringing if people think that he can replicate that season, which saw statistical outliers in points, steals, and most notable FG% that season.

I don’t think we need to talk about the nature of the serious injury Oladipo returned from, but more the nature of the effect it has had on his game since returning. During the Bubble, Oladipo was one of the worst defenders in the short sample size, having seemingly lost all ability to defend laterally with opposing attackers skipping past him at will. Add to that the rumours that Malcolm Brogdan is now the clubhouse leader and that certain members within the organisation are not happy with the attitude currently being displayed by Oladipo.

Statistically speaking, I think we see something very similar to his final year in Oklahoma, where he put up averages of 15.9 points, 1.2 steals, 4.3 rebounds, 2.3 assists, while getting to the line only 2.3 times per game. The biggest difference, though, could be the field goal percentage being closer to 40%, which will destroy his fantasy value.

Derek White is this year’s breakout fourth-year player, jumping from the top 125 in dynasty 8 cat to the top 50 this season. White’s three-point shooting in the Orlando Bubble was a revelation at 45% on high volume. Bryn Forbes is gone and the Spurs are finally ready to play White and Murray together. More minutes and White’s do-it-all style leave him primed for a breakout.

My bold prediction is that Aron Baynes cracks the top 75 and approaches top 50 value. He’s the starter now in TOR with Boucher as the backup. I project him for 28 mpg with the possibility of more. He can shoot, rebound, drain tres, and get his defense on. As a starter for PHO last season, there were many games when he stuffed the stat sheet, like his game against GSW on 10/30: 24 points, 2 tres, 12 boards, 7 dimes, 1 steal, and 3 blocks. When Marc Gasol played over 30 mpg as a starter for TOR, he was a top 50 player.

Zion Williamson will finish outside the top 100. It isn’t that I see Zion Williamson as a poor asset, and he for sure fits certain builds more than others, but given the lack of defensive stats in his career so far, as well as poor free throw percentage and a shortage of threes, I feel you’re paying a premium for a guy based on points and a field goal percentage. Add to the fact Zion’s lack of conditioning and time already missed in his NBA career, put me in the camp of letting others over reach for Zion this season.

Much to the chagrin of fantasy GM’s rostering Thomas Bryant, the Wizards signed NBA Mascot Enemy #1, Robin Lopez. While he has been a non-factor in fantasy over the last four seasons, his new and under-reported starting role will allow Lopez to regain form and push up towards a top 100 ranking. Bringing much-needed size, strength, basketball IQ, defense to the center position, as well as a good locker room presence to a team that wants to compete, Robin should find himself starting and playing 26-28 minutes a game.

It’s easy to overlook his rankings since his time in Portland, but on a good-ish team that needs him, Lopez should be able to return to form shooting efficiently, continuing to improve on his 3 point shooting (to keep up with his brother) and average 10 points, 6 boards, and over a block a game. It might be the least sexy pick you can make, but you can wait until the last round of your drafts and grab Lopez as your 3rd center. It will look like a good value in a few months.

John Wall, although ranked inside the top 40 in Yahoo, will finish the season outside the top 150 in per-game value.

Clint Capela is a fine center in his own right and seems to fit well on this Hawks roster. Supported by a plethora of shooting around him, the 26-year old is living the traditional big man’s dream. But is he everything this Atlanta team wants out of its center position? Capela took 99% of his shots at the rim last year, which, while it obviously doesn’t scream “versatile” (versatility will be a key word in this argument), it may not a big deal with the amount of aforementioned floor-spacing around him on this team. However, a player like rookie Onyeka Okongwu could provide a more diverse skill set on both sides of the ball. With a smooth feel for the game, post play, and a 72% free-throw percentage that could project toward a reliable mid-range jumper, the rookie may already boast a more robust offensive skill set than his veteran frontcourt counterpart. On a team like this, Okongwu could post a Capela-level of value and then some, putting up consistent big man stats with the potential added benefits of not tanking your FT% and producing a slightly better output in the steals category. Furthermore, you would think a mobile shot-blocker like Capela would be a serious paint-stopper, but he had just a 13% rim deterrence rating last year, which is clearly not ideal for a center. Curiously, he also had only a 6% rating as a finisher at the rim, which is a z-score rating that evaluates a player’s ability to finish once at the rim with adjustments for degree of difficulty and location of shot, per B-Ball Index. This low rating is likely a product of the types of shots Capela took down low, struggling to provide anything other than dunks and put-backs. Now I’m not arguing that Okongwu will be a significantly better finisher or shot-blocker than Capela. However, I am saying that Okongwu has the potential to provide more to this team than Capela does. That goes for both ends of the court as Okongwu can be more than just a rim-runner offensively, and can also guard several positions defensively while showing off his superior basketball IQ on both ends. That could be crucial for this Hawks roster, which, while overflowing with offensive firepower, is quite lackluster on the defensive end. While his versatility on offense seems like an upgrade, it’s actually Okongwu’s versatility on defense that could be his biggest advantage here. Once he’s adjusted to the league, the rookie will essentially be able to provide everything Capela does, plus more. His effortless court instincts, advanced footwork, ambidextrous finishing, and smooth ability to switch on defense combine for a strong argument for playing time over an energetic big like Capela – especially on a team that already has so many offensive answers, but few defensive ones. Needless to say, Atlanta’s acquisition of Okongwu could be disastrous for Capela’s fantasy value down the line. The 32.8 minutes per game he saw last year may be on the decline this season.

Vas’ Bold Prediction: John Wall will be an All-Star this season even if there will be no game, he’ll have the title. (If voting and things of the sort even happen).

Now, John Wall hasn’t played in like what? Two years? BUT he is a former five-time All-Star who has had seasons with averages that show double-doubles with 20+ points and 10 or so assists. He was the catalyst for the Wizards team and has taken them to the playoffs before. I think he utilized this massive layoff to his advantage. He trained, hard. And he also looks to be in great physical and mental condition. Also, time away from what you love will only make you desire it even more, and this is the case with Wall and basketball. He cannot wait to get back on the court, even if it is outside of Washington with all sorts of rumors going around. In the end, he seems primed and ready to return to his all-star level self.

Christian Wood will underperform his ADP
There’s considerable hype over Christian Wood’s potential, and I like his long-term dynasty value, but I suspect he won’t immediately mesh into the Rockets game-plan immediately. He was a borderline top 100 fantasy player last year while getting tons of touches on a very bad Pistons team. This year his ADP is in the early 60s according to Yahoo ADP. I doubt he reaches that level consistently this season. I suspect we see a slight bump, and he cracks the top 100, but is he worth a 4th or 5th round pick in your redraft league? Maybe not.
I’m buying San Antonio youth
Dejounte Murray and Derrick White are fantasy’s worst kept secrets at this point, and they are in for big seasons. But where I’m seeing some real value is Keldon Johnson. Probably not on many radars for traditional 12 team redraft leagues, but if DeMar DeRozan is moved this season (which seems likely), he’s in for a bigger role and has the skills to become a multi-stat fantasy contributor. Keep an eye on Lonnie Walker too, as his defense is going to get him on the floor in San Antonio, and if there’s a reshuffle on the roster, he could stand to gain as well.
Let’s cool our jets on the Devin Booker hype
I LOVE Devin Booker. The Suns are the darlings of the West, making some high-impact changes to the roster to build off the momentum they gained from a perfect performance in the Bubble. The Suns will be an improved roster and a better team, but what does that really mean for Devin Booker’s fantasy production? If you’re looking at him in the top 15 in your redraft drafts, it might be too early. Chris Paul will get him more shots, but he’s also going to take some shots away, not to mention that Booker’s fantasy value is tied to his value as a playmaker, posting 6.5 AST last season. Will he still be asked to take on that role next to Chris Paul? I’m tempering my expectations, sometimes really good players on bad teams lose their fantasy production when the team itself gets better players on it. Keep that in mind.