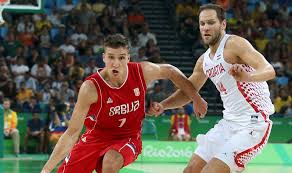 One of my preseason infatuations was Bogdan Bogdanovic. I still believe that, as the season continues, the Euro-Vet will carve out a tremendous role for the Kings and secure his place on fantasy rosters. His teammates are amazed by his poise and demeanor, as if he is a 10-year veteran. On the other hand, I admittedly didn’t think I would be rostering his namesake Bojan Bogdanovic on my rosters everywhere. So yes, they may not be brothers by blood, but how similar of a name does it take to make them say, step brothers. I mean, not only do they have the same surname, they kind of look alike.

Brennan Huff and Dale Doback were officially “step brothers”, but the only thing they had in common was their love for karate and Good Housekeeping magazine. Bojan and Bogdan both play basketball, are from some foreign country or another, and currently play in the NBA for small market teams.

Speaking of step brothers, well more like step fathers, I have a mental block for some reason when it comes to Kyle Anderson. Time and time again, I have been referring to him as Kenny Anderson. Yep, I’ve got the yips, but it’s just a case of saying Kenny when I mean Kyle. A little research would tell me that Kenny has publicly said he is reminded of his youth when watching Kyle. Both were highly recruited point guard prospects out of the NY/NJ area, but that’s about it. Nothing more to that relationship besides a common last name. The funny thing is, Kenny would go on to be a fleet-footed and flashy point guard with great handles and knack for scoring. Kyle on the other hand has a reputation for being a brilliant passer, but moves almost at half speed and is only power forward eligible. Yet, here we are today, calling Kyle by the name of Kenny and Kenny by the name of Kenny. Don’t you dare touch my drum set Kenny! I mean, Kyle!

Call me a little GIF happy today. So what do these two absolutely obscure paragraphs have to do with each other? Well, you run a team for a living, no, not a little league team, a fantasy team, and both of these so called step-brothers can be fantastic adds for your fantasy squads. On the season, Bojan Bogdanovic has been shooting over 50% from the field for a line of 13 points, 1.6 3PM, 3.3 rebounds, and 1.4 assists per game. He’s also shooting 82% from the charity stripe. In the last 2 weeks, he’s hitting 2.0 threes per game. This all on just under 30 minutes per game. Indiana has been hot, and they signed Bojan because they like him, a lot. He has been seen on the court in crucial moments time and time again, and should continue to play important minutes as the season lingers on. If you need some threes and percentages help with a lack of TOs in 9-cats, Bojan is a safe bet.

As for Kyle, the point forward has been seeing really nice floor time with Kawhi Leonard out indefinitely. While his shooting is not to write home to Mom about, he’s still scoring around eight points per game for the season. What he is consistently doing for you is grabbing six boards a game, netting some nice percentages, handing out a few dimes and swatting a shot per game. Kyle is most productive with the ball in his hands, and the amazing part about that is his under one TO per game. He is a facilitator for the Spurs right now. Dejounte Murray and Patty Mills have proved to not be the best point guards for running an offense, so seeing Anderson with the ball in his hands provides some potential short term fantasy gold.