Not that anyone is keeping score, but I made James Harden the highlighted player last week, so it feels kind of weak to be back here raving about the bearded one in back-to-back weeks. That said, there’s absolutely nothing weak about this ridiculous scoring effort. He actually posted an absurd 27 points in the first quarter alone, so anyone watching it live knew it could be a special night.

Shooting 55.9% from the field and 14-for-17 from the line is massive for any fantasy team. He didn’t put up his usual assist numbers, but we can’t really complain about a 60-point game. While a 61-point game is huge (this was actually Harden’s 2nd 61-point game of the season), he’s deep in the MVP race and should continue to bolster fantasy squads that are making their championship runs.

Mike Conley has really had some tough luck with injuries and never playing for an elite team. Now that Memphis appears to be in the midst of a confusing rebuild, it creates even more of a question mark surrounding Conley and his role on the team. You start to feel bad for him, but then you remember the sweet contract he signed. Still, it has to be rough to be at his level and rarely be in conversations about current great NBA players. He shows up, plays with this roster, and puts up his stats, which have him inside the top 30 for the season.

This marks back-to-back excellent games for Conely. The double-digit assists are really nice, as are the 3 3’s. It’s tough to say how things will go down for Conley the rest of the season, but for now, he’s humming along nicely and fantasy GMs should be excited about the production.

Whether it’s fair or not, Trae Young will always be compared to the future MVP-caliber player Luke Doncic. It’s not his fault that Atlanta made that draft day trade. While there were some seriously shaky runs earlier in the season, Trae has been on fire recently. He is just barely standard league relevant for the season, but over his last three games, he’s clocking in at a fresh #14 ranking in standard 9-cat leagues, averaging 31.7/3.7/8.7 with 4 3’s. He’s also shooting 93.9% on an insane 11 free throws per game. While he may never be at Doncic’s level, he can still make for an elite fantasy player and is showing off at the moment.

So close. I was hoping he could get the 50 mark in this one, but this is an otherwise amazing performance. The 49/8/16 is enormous. The efficiency and 6 3’s are killer. In fact, he is the first rookie to go for 45 points and 10 assists since MJ. The 9 turnovers are whack, but that’s the price you pay for playing a mind-boggling 55 minutes. Hopefully they can set him up in the hyperbaric chamber to recover. 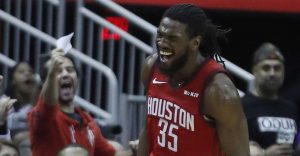 Once a decade or so, a rookie comes into the league and, not only is it extremely obvious that they are special, they immediately hit the floor running. Not since LeBron has a rookie demonstrated All-Star level production, keeping up with and often times dominating seasoned pros in the best basketball league in the world. Luka Doncic provides matchup issues for opposing teams and is such a dynamic offensive force for the Mavs, making every teammate better. While making serious waves in the NBA, in fantasy he still has plenty of areas he can improve. Currently, he’s been hovering around the top 80 in standard category leagues. The main culprits of keeping his fantasy value anchored are his percentages and turnovers. He also has room to grow in the steals department. For now, he’s an exciting, yet flawed player to roster on your fantasy squad, but he’s already one of the most fun players in real life and fantasy.

Luka was 2 boards short of messing around and was just a savage in this one. He scored at all 3 levels and was the obvious leader of the Mavs. When the percentages start to creep up, look out, because the sky’s the limit for Doncic.

When I was a preteen, I remember a super rare baseball card of Cal Ripken’s brother, Billy Ripken. The normal card had him holding a baseball bat without anything worth noting on the card. But there were a few prints of an original that showed where the goofball Billy decided to scribble a curse word that was gold to 12-year-old baseball card collectors. There were only a few copies of this card and I was lucky enough to find one in a fresh pack. It was so rare, that I managed to sell it to a classmate for $50, which I then wasted on more baseball cards. Sometimes an amazingly rare thing happens and you just have to enjoy the moment. Marcin Gortat managed to turn back the clock and post this out-of-nowhere gem on the Suns.

Now, this was unexpected. Gortat has been a complete nonfactor this season, but managed a gem of a game. I wouldn’t expect a repeat any time soon, but it’s nice to be able to talk about the Polish Hammer once again.

Does it sometimes seem like what AD does on the basketball court is kind of unfair? He simultaneously makes everything look way too easy, while also looking like he hasn’t reached his potential. Those eyebrows only add to his mystique as some otherworldly basketball entity. I’m not saying he’s secretly a real life Monstar, but if that was revealed to be true, I would only be like 90% shocked. He’s the clear cut #1 option in fantasy basketball this year and it’s not even close. If you drafted him #1 this year, enjoy your chip.

AD has been on a crazy tear this season, and especially so in December. This game is just additional icing on the cake and shows his insane ability to produce in every cat. The only nitpick is the lack of 3’s, but hitting a go-ahead basket, in addition to nearly 50 points more than makes up for that.

Please, blog, may I have some more?
Page 1 of 212»
View/Edit Profile
Change/Cancel Membership
Rudy's MLB Draft Room
Log in