The single most important tool to have in a fantasy auction draft is an efficient way to examine the big picture at any point in the process. I get a lot of questions about so-and-so being worth such-and-such money. The answer is almost always … “heavens to Betsy, no!” When I’m surprised by a question, I revert to exclamations from the 40s. Sometimes the answer is also “maybe.” I that’s the case, it’s almost always dependent upon factors such as: how much cap money have you already spent? Who else is on your team? How many teams are there? How many roster spots are there? Which players are you targeting? and so-on. More than snake drafts, auctions are a careful dance of timing, bluffing and careful reckoning.

Since all auction drafts are beautiful and unique snowflakes, it’s hard to assign clear-cut values to the players. I’ve seen Kobe Bryant go for as much as $57 in one draft and as little as $20 (Twenty!?!) in the other. Below is what I would consider the best of that “careful reckoning” you’ve been hearing all about recently (approximately 60 words ago). The value listing below is for a 12-team league with a $200 cap. The majority of leagues I’ve seen use $200, but some stick with the standard $260. If your league using a $260 cap, I would divide the the $260 budget G ->$100, F ->$100, C -> $60 instead of the $76-$76-$48 model noted at the top of the chart for leagues using $200 budgets. The prices under which each player is listed are the maximums I’d pay for any player. Would I pay $11 for tony Parker? Yes, I would. Would I pay $12? Only if Eva Longoria came to my house once a week to make sure my DVR properly recorded all my programs.

Also, for those of you hungering for a tier listing of the top 120 – this doubles as one. It may even triple as one on account of it’s splendid tier details, right down to the nearest dollar. No need to thank me. Your stunned silence is thanks enough.

Here are the auction draft values for 2010 fantasy basketball: (Click pic to see the entire spreadsheet). 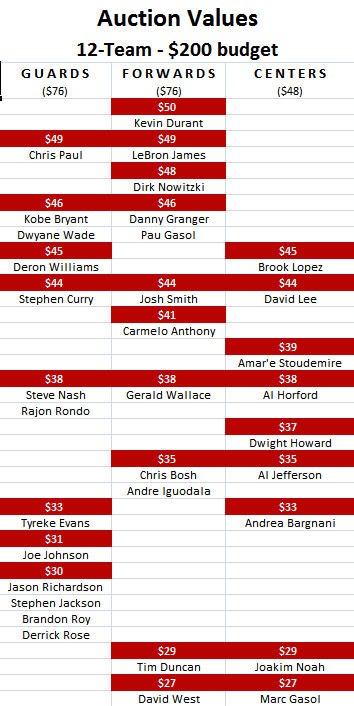