As I steadily stood fast next to Stephen Curry as my #1 player, I was reminded of Triumph the Insult Comic Dog Friday night.  With all that Lakers yellow and Curry missing all his treys, I was like “somehow that song Yellow, makes me want to pee!  I think because when it’s over, it’s a big relief to me!”

This is why you don’t panic on shooters, even if they’re the most elite players in the land.  Unlike your big man studs, they’re going to have more peaks and valleys.  We didn’t really see much of that inconsistency last year, but we got about the most epic cold-then-hot consecutive games we’ve ever seen.  After snapping his 3PTM streak at 157 games going 0-10 Friday, Curry comes out and BREAKS THE NBA RECORD FOR 3s LAST NIGHT!  WTF IS THAT?!

Gordon Hayward – Spread out the stats a little better after his debut, going 20/7/5/1/0.  Looking good after his finger bone had a hard part!

George Hill – Sat with a sprained thumb.  He said he was unconcerned after Sunday’s win, so this was likely a precautionary “we’re playing the Sixers” DNP.  Shelvin Mack got the start, and was a meh 8/0/5/2/0.

Robert Covington – Bringing that 17% FG% up!  12/8/1 with no TO on 4-5 shooting (3-4 3PTM).  Wait a minute, when your ice cold shooter who you want to be your wing of the future is finally hot, you give him 5 shots?!  EMBIIIIIID might need to take some of his raging hard usage and try to distribute (ew).

Dario Saric – Had a couple nice games, but still just looks like “a guy” to me.  Back to back duds, giving him 4 absolutely unusable games out of his 6.  I think they should’ve been developing Jerami Grant as their SF of the future.

Jahlil Okafor – Had some pretty nice dunks, taking it right at Monsieur Elbow!  Although both could’ve been offensive fouls…

John Wall – Eject-a-mundo.  Got two techs and bumped an official, which could spell a suspension.  Even though he doesn’t do much, super deep leagues might want to keep a keen eye on this to stream Tomas Satoransky tomorrow again Boston if you have an open spot.

Spencer Hawes – With Roy Hibbert still ailing on a bad knee, Hawes went 13/13/1/2/0 with a trey off the pine.  He won’t be uber-consistent, but is playing almost 20 minutes a night with a decent line – deep leaguers could do worse.

C.J. Miles – The only Pacer who showed up, going 23/4/0/1/0 with 5 treys in his typical ThrAGNOF line.  While this hot, he’s a must-own ThrAGNOF for sure!  His 23 points nearly doubled the next highest Pacers scorer (two with 12).

Serge Ibaka – The trajectory keeps going down, but at least gave you a full 7/7/3/1/2 line with a trey last night.  This was a blowout the whole way, so his 25-and-a-half minutes after getting benched the game before I don’t think is a harbinger of things to come.

Bismack Biyombo – Multi-blocks in 3 straight now, going 2/7/1/0/2 in this atrocious game.  Turning into the blocks streamer we were expecting.

Steven Adams – While I may have unjustly questioned the blocks, when Dion Waiters just gives you a cupcake, you THROW IT ON THE GROUND!

6/6/0/3/2, but another 2 TO…  Not awful, but wish we could see those dry up.  If you look close, you’ll see Adams hot his hand taped up in this one, which may have limited him a bit.  He apparently just “banged his thumb”, so for Adams, the South Park song would be “thumbbang”.

Domantas Sabonis – I was rather harsh on his game through preseason and the first few games of the year, but I watched most of this game and he looked pretty damn good.  15/10/1/0/0 with 4 treys; he’s not going to get many D stats, but if he can step out for 3s and bail out Russell Westbrook on some drives, then he’ll make his bacon.

Justise Winslow – I think you still hold through this shooting funk, but he airballed a 3 and looked more labradoodle-ish than Gordon Hayward!  2-13 FG, but it’ll get better.  Every other part of his game looks great to me.  But I guess shooting a basketball is semi-important…

James Johnson – Got a lot of extra burn off the bench, going 18/6/1/1/2.  Huzzah for an REL $0 FAAB bid!  Looked really friggin’ good too, at least 3-4 of his misses (5-12 shooting) were post plays or layups that barely rimmed out.  Not like he was Winslow-ing it!  7-7 FT was nice too, giving him a small sample 12-12 on the year after shooting 57.4% from the stripe last year.  Not enough consistency in standard leagues, but he needs to be owned in deepers.

Tim Frazier – This is the sell-high you’re looking for.  13/4/10/2/0 on 5-11 shooting, nabbing a dimebag as he’s about to cede major minutes to Jrue Holiday.  That said, if you’re in a deeper league, I think Frazier is still going to have a role.  So if you can’t get anything for him in like a deep 14er or beyond, I would just hold.  Not like Jrue is a stallion of health, and c’mon, it’s the Pelicans medical staff… 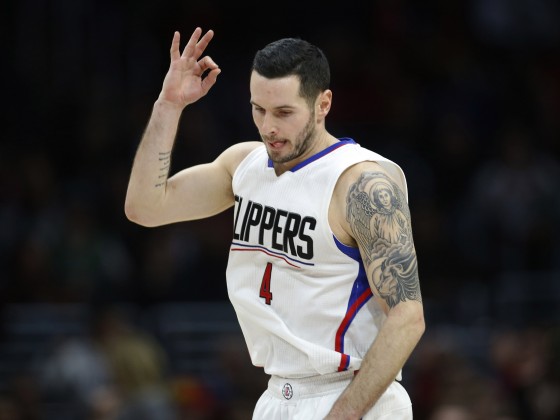 I hope everyone had a great start to their week 3, and I’ll catch you on Thursday morning for my next Daily Notes!