Trae Young will lead many fantasy teams in 2021. Which other Hawks are worth drafting?

No team had a more interesting offseason than the Atlanta Hawks (check out the November 30 edition of The Lowe Post podcast with Zach Lowe and Kevin Arnovitz for a detailed, non-fantasy breakdown). What had been a carefully constructed youth-movement-style rebuild for the past several years suddenly accelerated into “win-now” mode, beefing up the rotation with veteran contributors and casting the roles of the majority of last season’s core pieces into considerable doubt. Let’s take a look at where the roster’s fantasy values stand as we head into the 2020-21 season.

This team is built around Young’s strengths and weaknesses, so the roster turnover doesn’t affect his role or fantasy outlook. Young will still be the fulcrum of the offense and carry one of the largest offensive loads in the league, leading to oodles of points, assists, threes, and one of the most valuable free throw percentages in fantasy. If anything, adding all the competent pieces the Hawks did may only help augment him in the efficiency categories, particularly field goal percentage and turnovers (where he ranked dead last in 2019-20 per Basketball Monster).

He’ll never be someone who racks up boards or defensive stats, but he’s almost an automatic win in four categories and has a chance to improve on a couple of his biggest shortcomings. That makes for a solid first-rounder to build your fantasy squad around.

You’re forgiven if your forgot that Collins was the NUMBER SEVEN OVERALL PLAYER IN FANTASY HOOPS in 2019-20. Amid a 25-game suspension and Atlanta’s season ending pre-bubble (feels like it was in a different year), Collins’ rampage flew under the radar for most folks. The analysis should be straightforward then. Here’s a guy coming off a monster 22-10 season—where he shot 40% from deep on good volume and more than doubled his block rate—who’s entering his fourth year and just turned 23. He should be a no-brainer top-10 pick…except the Hawks made a series of acquisitions that makes Collins’ future role on the team quite murky indeed.

Per Basketball-Reference, Collins played nearly half of his minutes last season at center. After trading for Clint Capela and selecting Onyeka Okongwu with the sixth overall pick in last month’s draft, it looks like Collins will be playing the 4 full-time now. That could mean a dip in that aforementioned boosted block rate if he’s guarding the perimeter more, and also a bite into his prodigious rebounding numbers playing next to a guy who’s averaged better than 12 boards a game over the past three seasons in Capela. Meanwhile, his offensive game will be further pushed out to the perimeter, which should result in more treys, but at the cost of a decrease in field goal percentage as a greater share of his shots come from distance.

Overall, adding so much firepower around him and Young puts a ceiling on Collins’ volume. He’s so darn efficient that he has a fairly high floor—and his ADP somewhat prices in the uncertainty around his role—but if the raw totals do indeed drop and he can’t hold on to the massive gains he made in threes and blocks last season, Collins could take a major step back in fantasy in 2021. I’m a little too uncomfortable to spend an early third-round selection on him. 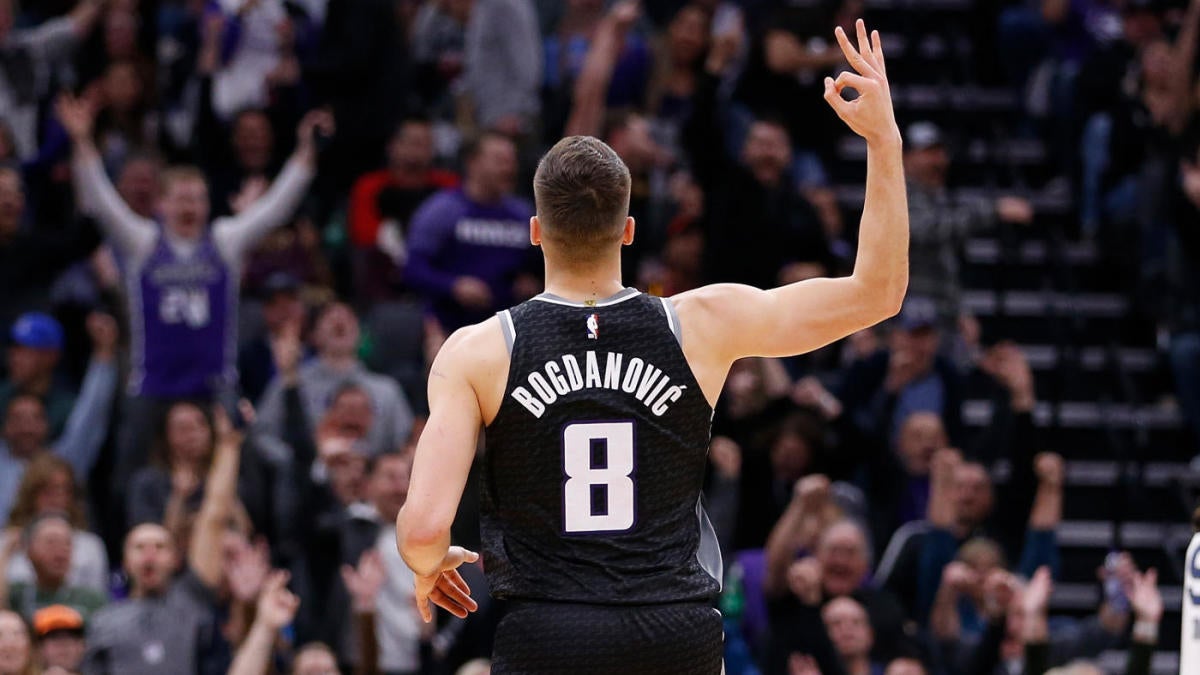 Bogdan Bogdanovic will be raining threes in Atlanta this season.

Though Capela was dealt to Atlanta in the middle of last season, we’ve yet to see him suit up for the Hawks. That means we don’t know how he fits on the roster next to Collins, but he’s entrenched as the starting center and should occupy a role similar to the one he played so well in Houston. Instead of rim-running after screening for James Harden, he’ll be doing so after screening for Trae Young, resulting in the same steady diet of lobs and put-backs that has fueled his low-teens scoring and sterling field goal percentage.

Expect similar numbers to those he put up for the last four seasons as the Rockets’ starting 5—someone you can count on for boards, blocks, a high field goal percentage, and low turnovers.

Gallinari has been a metronome over his past four healthy seasons, averaging right around 19 points, 5 rebounds, 2 assists, 2.5 threes, 1.5 turnovers, and 90 percent shooting from the line. He’s also started every single game he’s appeared in over that stretch—something that is about to change as he dons a Hawks uniform, according to GM Travis Schlenk.

Gallo should be an effective sixth man and post similar rate statistics, but his volume will decline as his minutes and touches go down, making him an unexciting fantasy pick who can help shore up your points, threes, and free-throws without hurting you anywhere. That’s perfectly fine, but not worth spending a sixth-round selection on.

Fresh off signing a 4-year, $72 million deal, Bogdanovic should step right into a starting job next to Young in the backcourt. He’s always been an exciting prospect who’s never quite gotten the chance to show what he can really do in a featured role. I wouldn’t say he’ll be “featured” in Atlanta, but he should top 30 minutes a night for the first time in his career and will give the Hawks a legit secondary playmaker to take some of the creative pressure off of Young.

With an increase in workload, I would expect at least slight improvement in the numbers that made him a top-100 fantasy player last season. Given that he’s going right around his 2020 ranking, he could represent a nice value in the middle rounds.

Cam Reddish could be in line for a breakout in his sophomore season.

Huerter was on track to becoming who Bogdanovic is—an off-ball sniper who can function as a secondary playmaker. Now that the wing rotation is overcrowded in Atlanta, Huerter is pushed to the bench with no guarantee of a healthy diet of minutes. As one of the top shooters on the roster he’ll be in the mix for sure, but he doesn’t need to be on your fantasy squad unless you’re desperate for some triples with your last bench slot. I’ll pass.

After a hellacious start to his rookie campaign that left him outside the top-200 overall in fantasy, Reddish really perked up right before the league shut down in March. Over his final 23 games, he averaged better 14 points in 28 minutes per contest on 46 percent shooting from the field. He also nailed 2.1 threes on 42 percent from deep to go along with 1.3 steals and 85 percent accuracy from the line. He would have been a mid-round sleeper target for me had it not been for Atlanta’s offseason overhaul leaving him with no consistent path to major playing time.

If I had to pick one of the young wings to break out, it would be Reddish, whom Arnovitz said could end up “their very strong second-best player before this is all over” on The Lowe Post. I’d take a flier on him late in the draft, but it may be some time before the rotation shakes out and he establishes himself as a fixture on the wing in the Hawks’ best lineups, so be prepared to cut bait on Reddish immediately for a hot early season pickup.

He may be the nominal fifth starter in Atlanta—at least according to speculation from Lowe and Arnovitz on the pod—but Hunter is much better in real life than fantasy at this stage of his career. His defensive tools make him a sensible choice to round out a five-man lineup, but he’ll be at the bottom of the totem pole offensively. Couple that with the limited offensive feel he displayed as a rookie, the fact that his defensive acumen doesn’t translate to gaudy steals and blocks totals, and the looming threat of limited playing time because of all the wings Atlanta can throw out there and you’ve got a classic recipe for waiver wire fodder.

Top ten draft picks are always exciting in fantasy, but Okongwu is coming into a purely developmental situation. Capela will grab most of the center allotment, with Collins or even Gallinari nibbling away a few extra minutes at the position in smallball configurations. Barring injury or Covid-related absences, Okongwu should be left on the wire this season.

Well, they don’t call him “Regular Season Rondo” do they? You can pencil in Young for 75 percent of the point guard minutes, and with the plethora of competent wings on the roster it’s doubtful we’ll see many lineups featuring multiple PGs. With a strict upper bound on his potential minutes, Rondo is undraftable in 2021.

Dunn is going undrafted—as he should be, given that he’s not even in Atlanta’s second unit—but is worth a (brief) mention as someone who returned better fantasy value than Bogdanovic a year ago, purely on the back of his league-leading steal rate. If Dunn worms his way into 20-plus minutes a night at any point, and you need to boost your steals, he’ll come into play as a streaming option.