Two weeks ago, the New York Times published an article detailing the rapid decline of triple-doubles in the NBA. On Monday, Kyle Lowry went 16/10/10 against the Timberwolves, earning just the second triple-double of the season (Rajon Rondo earned the season’s first on January 1, 2012 against Washington).

Below is a visualization of how accurate the Times’ assertion actually is. 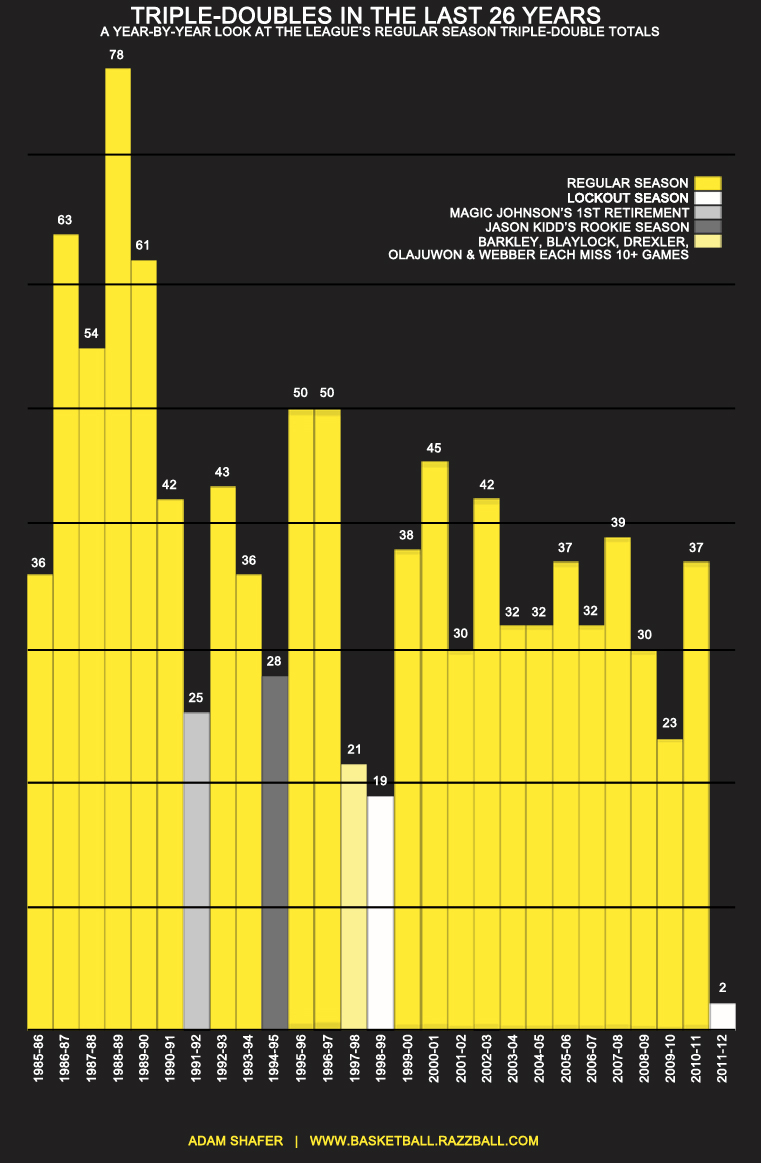 The typical NBA season is 24 weeks long and yields an average of 41 triple-doubles each season, or 1.7 every week. This season has seen that average plummet to 0.4 trip-dubs each week.

If the two lockout seasons are removed in addition to the 21 triple-doubles earned in those two seasons, there are 1,005 triple doubles spread out over 24 seasons.

The largest outlier occurred in the 1997-98 season, the season before the lockout season. Despite playing almost 900 more games in 1998 than in 1999, the earlier season saw just two more triple-doubles. As suggested in the graphic above, a large number of players with a knack for earning triple deuces missed a fair amount of games that season, but enough to account for about half the number of triple doubles it should have had? Not likely. In 1997-98, the league averaged the seventh-worst ORtg and the eighth-best DRtg of the last 26 years, which also doesn’t truly account for the lapse. Alterations to league rules such as hand-checking (instituted a couple seasons earlier), or moving the three-point line back to its original position also don’t account for the dearth of triple-doubles in 1998, as the same effects were not seen in the seasons before or after. Perhaps that Bulls team was so good that it left opponents who had just faced them shattered for several games afterward or terrified for the five or six games leading up to it.

Frankly, that last theory makes the most sense.