Fantasy-wise, defensive stoppers don’t get much respect. Chances are if you’re known for defense, it’s because you’re not known for offense. There may be a spot for you in a real team’s rotation, but not my fantasy team. While offensive stats make up six-and-a-half categories in most leagues (we’re splitting rebounds in half – I don’t truly know where rebounds should go. A player can be an offensive dynamo and still be a worthless rebounder. He can also be a defensive powerhouse and not grab many boards. The latter seems less likely, but still… Wait, what was I saying? The open parenthesis was, like, 50 words ago. Oh yeah …) defensive stats still make up the other two-and-a-half categories. That’s 28 percent of your fantasy team you just can’t leave to chance. Fantasy basketball’s defensive stats are primarily made up of steals+blocks, or “stocks” according to Bill Simmons or “beals” according to Jessicas or other streets in New Orleans. Whatever you want to call them, they’re a good way to evaluate a player’s defensive value through the scope of fantasy.

Below are the 2010 fantasy basketball top 30 defensive dynamos. For contextual purposes (and absolutely no other purposes!) the league average stl+blk was 83 during the regular season (that’s like a player averaging roughly 0.5 stl + 0.5 blk a game), anything over 110 is fantasy relevant (0.7 stl + 0.7 blk per game). 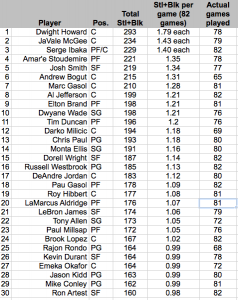 If there are three immediate takeaways from this list, the first is that Bogut remains an underrated defensive player as well as someone likely to be among the most underrated players next season. The second is that Wade doesn’t get enough credit for his defense. Third, the term “takeaways” should never be used by anyone younger than 40. So my apologies for that.