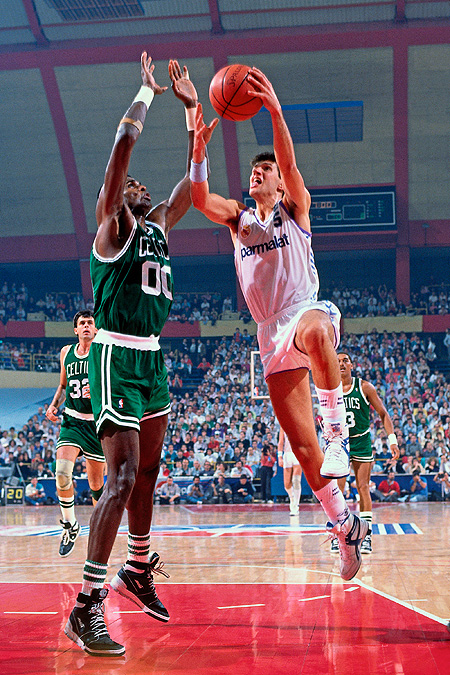 It’s boom times in the NBA as the Celtics traveled to Madrid to play, well, anyone, really. Whoever felt like they could keep up, I guess. The McDonald’s Open was all part of Commissioner Stern’s plan to ingratiate the Europeans with the game. Or maybe it’s all a plan to get the International Olympic Committee to let pros play (it’ll never happen. That would be like letting baseball players run wild on steroids; it would totally skew and skewer the competition.) Or maybe Stern just wanted out of the States and away from all the contract negotiations he’s spent the last year roiling around with the player’s union; negotiations of which, the league and the players’ union finally finalized after agreeing to a deal six months ago! Six months! I have no idea why negotiating contracts takes these guys so long. Do they write their demands in code and scatter clues throughout the country? Are both sides hunting down revenue sharing clues like they were Carmen Sandiego? If they let the fans participate, helping to search for puzzle pieces would make impending lockouts a lot more fun. Be sure to scatter a few down in San Antonio’s HemisFair Arena – maybe that would bring out a few fans (nothing else seems to). That was mean. What I’m trying to say is: no one cares about the Spurs. It’s just not a winning culture down there.  Wait. That actually didn’t sound any nicer than the first thing. How ’bout this: I’m pretty sure the Spurs won’t finish last this season with an expansion team entering the league. That being said, I’m pretty sure the Spurs will still be the worst team in the Midwest. They took second-to-last last season because Sacramento, California, was considered a Midwest club. The league moved the Kings and stuck a new Miami team in its place this year. That’s how bad the Spurs are. The league keeps dragging coastal squads into their division to keep them from being at the bottom of it. I’m excited for the start of the season, if only for another eight months of bagging on the Spurs.

Stojan Vrankovic – The Celtics were in Yugoslavia to play in the second annual McDonald’s Basketball Open, but also to convince the highly coveted 7-foot-2 center to come on over and play at the Garden. And what better way to do that then a) beat his national team by 28 points, b) hold him to the fewest minutes of any of the team’s starters, c) I can’t prove this, but I’m almost certain Larry Bird refused to call him anything other than “Stanley,” and d) a, b,and c were enough. If you want more, you’ll have to earn it. On another note, traveling to Madrid and whupping up on the Euro’s best talent probably isn’t the best way to convince them to transfer to the NBA, something Commissioner Stern seems to think will be a good idea. That was the whole point of throwing the tournament in Europe. Tubular. A huge flush of Europeans in the NBA. Good luck with that.

Mark Price – The Cavs matched Washington’s … ahem … Price by signing the reigning …ahem … Marksman to a whopping $5 million over five years earlier this week. I’m not too hot on Price and $1 mil. a year seems like a hefty tab for a one-trick pony. I would say that D.C. dodged a … ahem … Bullet, but no one in D.C. ever dodges bullets.

John Stroeder – Golden State waived him, which doesn’t really affect your fantasy team because no one would draft a guy even the Warriors wouldn’t play.

Patrick Ewing – The bruised knee that he hurt in an exhibition two weeks ago- like, a Rob Lowe-type exhibition? Uh, no. This one was in New Jersey. You’ll have to be more specific than that, my man.  Anyway, his knee looks to be healing okay and he’ll be ready for Rick Pitino’s uptempo offense come Opening Day … or as ready as any 7-footer with brittle legs who runs like a man with $30 worth of nickels in his pocket can ever be.

Duane Eddy Washington – At first when I heard New Jersey’s Duane Eddy Washington had been banned from the league for cocaine use, I thought, “Duane Eddy seems more like a marijuana type and I’m pretty sure he’s from New York and way too short to be an effective member of the NBA and probably should have stuck to playing “Rebel Rouser” for all his fans.” But then I continued reading the newspaper article – which I highly recommend doing if you’re interested in understanding things fully – and realized they were talking about the 4/2/2 Nets sophomore Duane Eddy Washington. After I finished reading, the only question I had left was, “who the hell is Duane Eddy Washington!?!”

Orlando Woolridge – … Speaking of former Nets banned for drug use: Orlando Woolridge! Warriors coach Don Nelson warned the league of how good the Lakers are now that they acquired Woolridge. Do you suppose Nelly flipped through the back page of every SF Chronicle last year, compiled all the box scores, sharped his Dixon Ticonderoga pencil, crunched the numbers, rechecked his math and set forth that information unto the rest of us, or do you think he saw the World Champs steal a 17 ppg forward from the Nets and figured he’d tell us what we already knew?

Chuck Nevitt – The Rockets signed the 7-foot-6 behemouth for reasons that remain almost as unfathomable as the existence of a 7-foot-6 basketball player who has never averaged more than 1.5/1.5/1, with 0.7 bpg. This feat from Nevitt seems impossible to me. Don’t draft him. I know he’s big and big is attractive, but trust me, after Nevitt, the Rockets will never think of putting another 7-foot-6 cat on their squad. It’s just too much trouble.