I kept telling you that was OK to pick up Rasual Butler while he was producing, but certain fantasy sites that sound like “drive-thru” and “he is Alex Len” insisted that he wouldn’t keep it going. He’s washed up, they said. There’s no minutes for him, they said.

Now that he’s averaged 28 mpg and 18.8 ppg over his last four, and shot 54 percent from downtown over that span, the sites that shall remain nameless (you probably use them every day) say oh yeah, maybe you better claim him off waivers. Same old over-the-top song-and-dance they’ve been doing all year.

(One post in the site that sounds like “Ragu” said Jerami Grant is “not very good at basketball,” even though he is in the NBA, and he is getting minutes every game. Nevermind that he can’t hit a shot from 4 feet out, he is athletic and gets stats for deep leaguers.)

My advice is to have fun playing fantasy. Don’t stress about it too much. Unless you have $100 invested in a league or a bad haircut wager on the line, which in that case go ahead and obsess over Rasual Butler. Otherwise, add and ride him while he’s hot.

One of the reasons I’m spotlighting Giannis Antetokounmpo is because I love his game, view him as a poor man’s Kawhi Leonard, and have visions of him blossoming this year if Jason Kidd stops doing his best Larry Drew impersonation.

Although he’s starting to fill the stat sheet with regularity, he’s still a highlight waiting to happen and we can’t overlook his overall entertainment value. Case in point: The play last weekend where he covered half the court in one move against the Pistons. Was it a walk? Probably. Did it look badass? You bet your Mokeski it did.

But the real reason is for the betterment of humanity and Giannis himself. Has there ever been an athlete’s name that was more difficult to pronounce? It’s so bad that he was smacked with a nickname (The Alphabet) the second he was drafted because people were too lazy to look up how to say his name.

Even after a whole year in the league no one knows how to say it, players, coaches and announcers included.

So here it is:

You can also hear Antetokounmpo say it the right way, and his teammates say it the wrong way, in this hilarious video.

Never say it wrong again. Especially if you ask someone in your league to trade him to you in person or on the phone.

Up until this year, Jimmy Butler looked like he was always going to be a Wesley Johnson–Iman Shumpert type of wing. Can get you 13-15 points on a good night, hits a few three balls, shoots crappy from the field and nabs a few steals here and there.

His improvement was steady over his first three seasons, but heading into this year’s fantasy drafts, the thought going through most people’s minds was: This guy’s a sleeper, sure, but Derrick Rose is coming back. If Rose is finally healthy, Butler is a non-factor, and even if he isn’t, we’re not missing out on much.

Right here I instruct you to crank up the volume on your device/computer as loud as you can and click on this link.

Butler came into Friday’s tilt against the Blazers with a string of four straight games where he topped 20, including a 32-point explosion against the Pacers. I’m singling out that Blazers game as a caveat, as Da Bulls entered Portland with no Rose, no Pau Gasol, no Kirk Hinrich and no chance of winning. Butler, who had nine points on 3-13 shooting, joined his teammates in chucking up prayers to try and stay in the game, and almost none of those prayers were answered.

I will say this. The Portland game does expose Butler as a guy who cannot carry a real NBA team. In other words, he is not a healthy Derrick Rose in Derrick Rose’s prime. I think Butler’s value is intrinsically tied to the health of this squad. If, for example, Gasol is healthy, but Rose isn’t, Butler is very valuable. If both are healthy, still valuable, but not as much. If neither is healthy, he will be up and down, struggling against good teams, dominating bad ones.

Long-term, I see a sell-high wing. Yeah, it’ll taste good right now, but later tonight, your significant other will be relegating you to sleeping on the couch. And it won’t be because you snore.

Still hungry? Order up one of these flavors:

There’s pretty much no in between with these dudes. Other than, say, Nate Robinson, they’re either future all-stars or total duds. For every Michael Jordan there’s a Harold Miner. For every Kobe Bryant there’s a Fred Jones. For every Dominque Wilkins, there’s a Brent Barry.

And then there’s Gerald Green, who is definitely not an NBA jobber, but is not quite an all-star yet. Not really sure if he ever will be, and what scares me most is that while he was a pretty awesome dunker, he’ll always be known as a gimmick dunker for his Birthday Cake Dunk. And being a gimmick dunker is kind of like being a gimmick wrestler on the order of Koko B. Ware or the Gobbledy Gooker.

In a way, it would be interesting if Green never was an all-star, because he wouldn’t be the first 6-7-ish wing sixth man for the Suns who can run the floor, shoot from distance, was on the same team as Jeff Hornacek and never made the All-Star Team.

When I was a kid, I could tell the difference between a name brand and an off-brand cereal instantly.

I knew when my parents tried to cheap out and pass off Puffy Choco-Balls as Coco Puffs or Fruity Dino Bites as Fruity Pebbles. I didn’t even need to put the spoon in my mouth to realize that it was Tasty Silly Trinkets, not Lucky Charms, sitting before me in a sea of milk.

So if I plugged Kevin Martin in where Klay Thompson sat on your fantasy roster, would you know the difference? 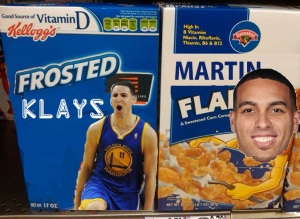 If you were in a keeper league, yes, of course. You’d be pissed because I swapped a 24-year-old young buck with a 31-year-old injury risk. But in a normal league, you might notice a slight drop-off in quality, but you’d probably just keep plowing ahead like I do now when I eat the Smack Yo Mamas I bought for my kids instead of Sugar Smacks.

This argument looked a lot better before both guys put up absolute duds on Saturday night, but Thompson’s hand injury sort of balances it out. So bear with me. 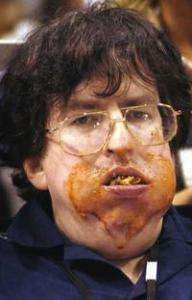